I hadn’t driven a Jeep in a long time, so testing the Compass was something I expected. Especially thanks to the promising e-Hybrid system that was recently introduced in this compact SUV. The same smooth hybrid technology was also introduced in the Renegadesmaller, but also in the Fiat Tipo and 500X and brand new Alfa Romeo Tonalewhich also has much in common with this compass.

Today, half the FCA of the Stellantis group does not hesitate to put the “Hybrid” logo on their models. Just look at the fiat-panda i 500 hybrids, whose 12-volt hybrid system is really very “smooth”. However, in the case of the Jeep Compass and the models mentioned above, the e-Hybrid designation is much more justified. Unlike Italian city cars, it operates at 48 volts and includes, in addition to a belt-driven alternator-starter, a 15 kW electric motor that has been integrated into the housing of the seven-speed automated gearbox double clutch. new design. The peculiarity of this system is that the car can, in some cases, move completely electrically, which is generally not the case with the so-called MHEV or soft hybrid vehicles. So I was curious to experience it in practice …

The petrol engine that is part of the e-Hybrid package is a 130 hp 1.5 four-cylinder and I like that right away. I’m not a big fan of the three cylinders. I know, one cylinder less to fill logically means lower consumption, and usually all three cylinders can also boast an exceptionally elastic character, but in most cases I do not like the specific sound and vibration that usually produce these engines. Not so in the Compass e-Hybrid, which is all smooth. Not only when it moves electrically (when starting, maneuvering, but also sometimes when driving, for a few tens or hundreds of meters if the small 0.8 kWh battery is sufficiently charged), but also when the engine gasoline is running, unless, of course, you go full throttle.

I would also rate driving comfort as pleasantly smooth. However, this does not mean that the compass stretches the road like a mop. On the contrary, both straight and curved, it shows impressive stability. It would be an exaggeration to say that the car always stays perfectly horizontal at tight corners, but the running angle of the bodywork is still perfectly acceptable, and that’s why: if killing the bodywork rolling means a rock-hard suspension, so i know what to choose when it comes to a family SUV for everyday use. For me, this is well offset by the excellent audio system that my test compass (Limited) was equipped with, as I expect from an American car, even if the Compass is now built in Italy.

In terms of performance, the Jeep Compass e-Hybrid lacks nothing in the real world. Also, you don’t have to worry about driving modes, because there aren’t any … To be honest, I find some relief there, because I often find driving modes available (usually Eco, Normal / Comfort and Sport) too drawing and none of them live up to 100% of my expectations. On the road, the contribution of the electric motor is real. The feel is slightly different from other electrified models and is certainly not unpleasant, at least as long as things go well. Another good thing is that motor skills are not a problem, although the Compass e-Hybrid (unlike the Compass e-Hybrid 4xe hybrid plug-in) sends the power of its gas engine and electric motor exclusively to the front wheels, which for some will be enough to make it sound like a cheap Jeep. But is this soft hybrid technology finally paying off? Of course, we should not expect miracles, because the Jeep Compass e-Hybrid is not a complete hybrid, but our average of 6.6 l / 100 km in a test distance of just over 500 km in different conditions it doesn’t sound bad at all. for a compact gas SUV.

From its facelift, the Compass gets FCA’s defunct UConnect5 entertainment information system, combined with a fully digital control panel. The same goes for the Compass e-Hybrid. In this case, it has specific menu screens that indicate how the mild-hybrid system works and how much energy has been saved or recovered (the gasoline engine can also be turned off while driving, but with low loads). However, it’s not easy to navigate the menus, or at least it wasn’t for a short week of testing. As for the dashboard, it’s even worse: of course, different screens are possible, but for example the simple display of the daily counter is not evident in certain display modes. The worst thing is when you want to check the total mileage: it only appears (briefly) after turning off the ignition, or maybe I haven’t dug enough.

Along with the complicated digital ergonomics, the steering wheel control levers and the multifunction buttons on the steering wheel also deteriorated my knowledge of the Jeep Compass e-Hybrid. I don’t find them very pleasant to the touch, even though they do their job. Also, the rather thick edge of the steering wheel, which looks a bit padded, I didn’t like at first. This hurts the comments a bit, which aren’t exceptional anyway (I sincerely hope Alpha engineers have been able to find an alternative solution for their Tonale). Still, I have to admit that by the end of the testing week it no longer bothered me, and in the end it seemed to fit the “soft character” of this Compass.

The biggest downside is that the cooperation between the gasoline and electric engines and the robotic gearbox of my test vehicle was not always smooth. Sometimes it felt like the electric motor was pushing too hard, after which the four-cylinder had to take over with a nasty jolt. With a little tact we learn to tame this phenomenon over time. During the launch of Compass e-Hybrid, our on-site verifier learned that the software would be further refined. Since my test car was still registered in Italy, it may be one of those first examples that has not yet been equipped with the latest version. Therefore, we will have to re-check this point when the “Belgian” versions arrive. 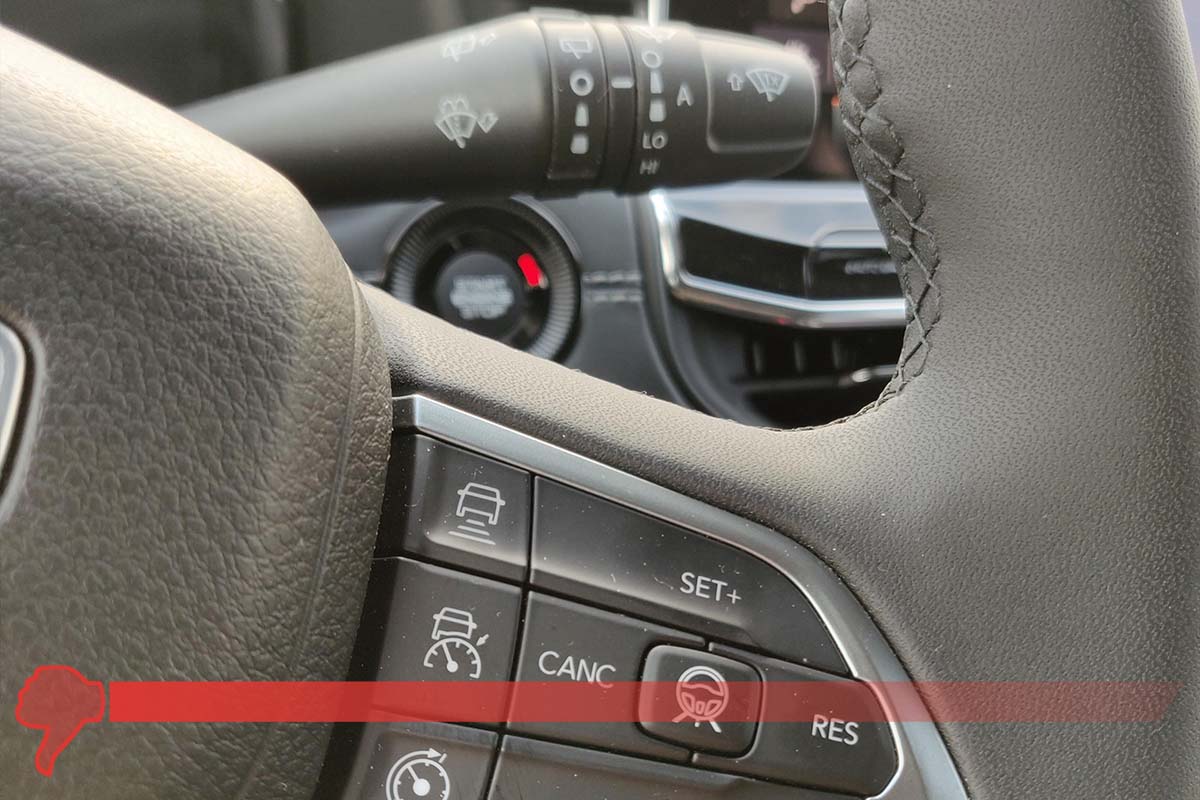 Aside from the minor annoyances, I found the Jeep Compass e-Hybrid to be a very nice companion. The small shocks I found sometimes (especially after a cold start I think) were a false note so for the rest, it turned out to be a very nice and pleasant to drive compact SUV, which is also quite efficient in fuel. And this is perhaps his greatest achievement for a Jeep, even though it has no four-wheel drive. But its brand is very expensive: its catalog price of € 38,130 is a little over € 9,000 higher than that of its technical cousin, the Fiat 500X with the same propulsion system (although it is less equipped in its version basic).