Between pedestrian streets, new green neighborhoods and days without cars, Barcelona offers a calm face. The current projects reflect the new life that the capital of Catalonia can offer.

Ada Colau has launched many projects where the presence of cars and motorcycles will be minimized. The hell of noise and pollution will give way at the end of the play to a quieter space.

Four-meter-wide sidewalks, bike lanes, two bus lanes and a single car lane, Via Laietana will soon be unrecognizable. One of the busiest (and congested) streets in the city center is undergoing a radical transformation to bring a little more serenity to the neighborhood.

The plans and images of the project are reminiscent of superblocks, these pedestrian blocks in various neighborhoods of Barcelona that have marked the mandates of Ada Colau and have even been hailed by the UN as an example to follow in the fight against global warming. The transformation of Via Laietana is also part of the major pedestrianization project of the current municipal team, which has set a goal of 1 million square meters without cars before 2024.

Pedestrians will be able to benefit greatly from the new avenue thanks to the construction of very wide sidewalks but also to the creation of new squares. A large esplanade will remarkably connect the cathedral with the market of Santa Caterina.

In the direction of Tibidabo, a lane will be reserved for buses, taxis and vehicles of the residents of the neighborhood. There is another lane for cyclists. In the other direction, towards the sea, buses, taxis and bicycles will share a corridor. Non-resident motorcyclists will only have one lane, sea direction, and will be limited to 30 miles per hour.

To avoid saturation of the sidewalks, the council announced that there would be no terrace or bar in the restaurant on the new Via Laetania. 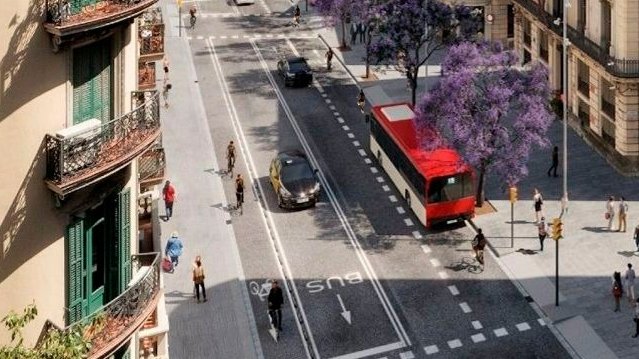 The city council has approved a budget of 44.56 million euros to give birth to a new boulevard in Barcelona. The project drastically reduces the space for vehicles as much as it increases the space for pedestrians. The roads and sidewalks of the current boulevard disappear to give way to uniform paving. Six meters wide for pedestrians are recovered. The passage of vehicles will be limited to vehicular traffic by residents, bicycles, buses, delivery of goods, service vehicles and access to parking lots in the district. 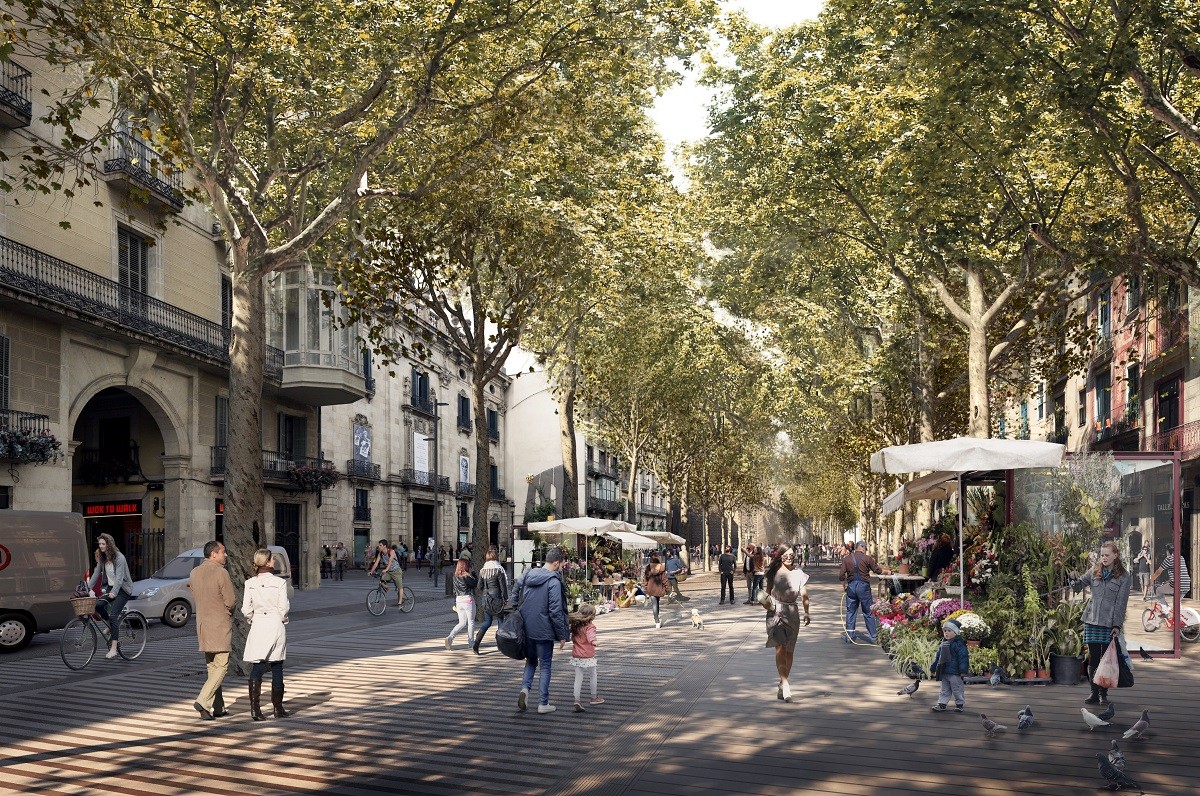 There will be even more benches and chairs on the sides of the central aisle, in the shade of the trees. The boxes of flowers and plants will be enlarged to the height of the green. Unified lighting with a single simpler and more functional design. Jordi Rabassa, councilor of Ciutat Vella, has assured that there will continue to be florists in the new Rambla. There will also be kiosks, some of which will be moved to make it easier for pedestrians to cross.

The route of the Colom-Drassanes area will be modified to improve the connection with the coast. A new urban arrival space will be created in front of the sea. Set of trees where the promenade meets the shipyards and the statue of Columbus. 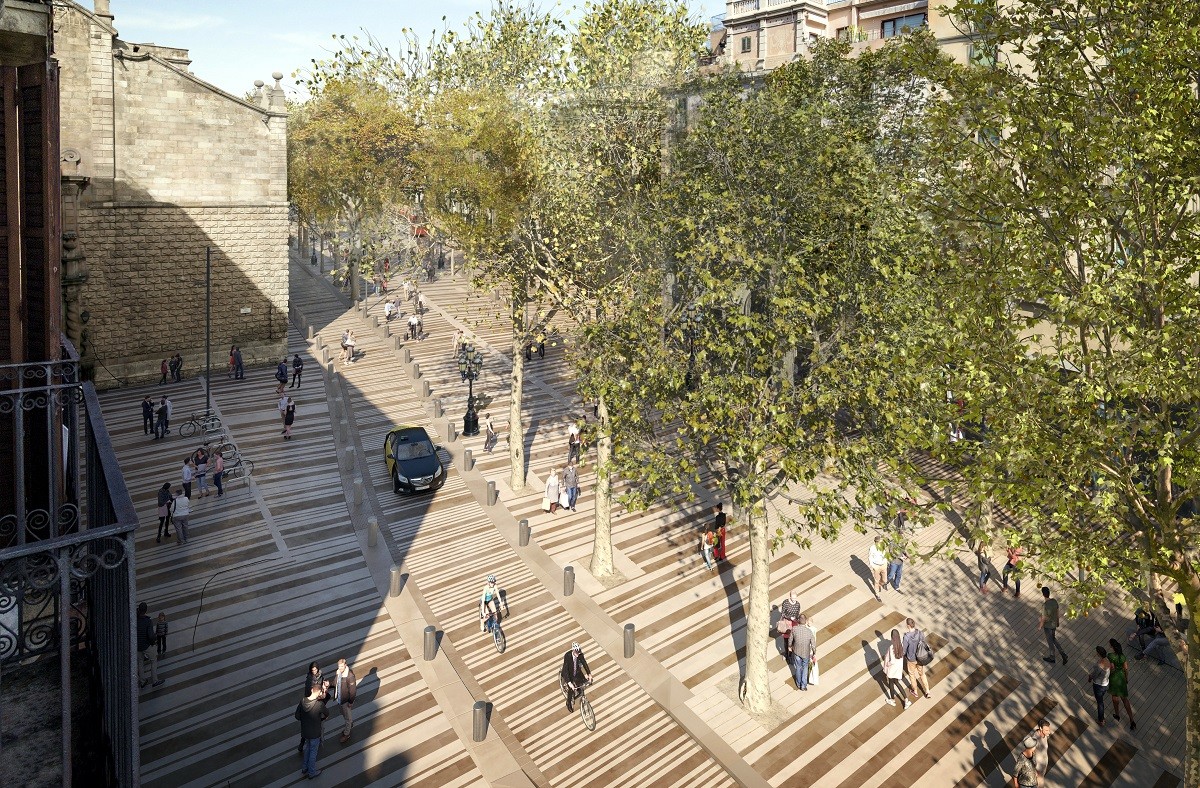 According to the council, the new Rambla will promote culture, defend the local way of life of the residents and limit tourist overflows.

Work will begin later this year.

Work began in 2021 so that the Catalan capital could finally be detached from this urban road that crosses the entire city. To facilitate the movement of people, a large space is left for the installation of a tram in the central corridor of the avenue. Bicycle lanes, sidewalks and green spaces also occupy much of the space. Polluting vehicles, cars and motorcycles, are kept to a minimum.

Between Passeig de Sant Joan and Carrer Marina, the tram will run along the central trunk next to a 4-meter-wide two-way lane separated by a green area. The sidewalks will be widened to seven and a half meters. Two lanes on the right and left will be reserved for cars and motorcycles. 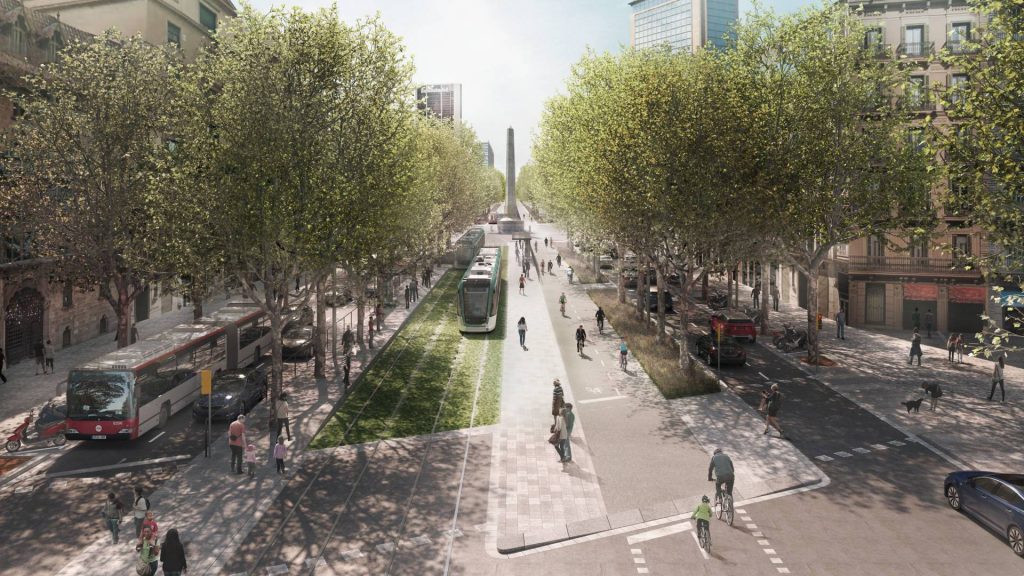 One of the big changes is at the confluence of the Diagonal with Aragó and Marina streets. Priority is given here to pedestrians, trees, cyclists and trams. Cars will be diverted from this section of the Diagonal to Aragon. Road traffic from Marina Street will only be able to turn left when you reach Aragón, and you will not be able to head towards Avinguda Diagonal.

Between Marina and Castillejos streets, the central boulevard is maintained (with an underground tunnel) and the tram will pass on both sides. The sidewalks will be widened to seven and a half meters and car traffic will be reduced to a single lane. The two-way bike lane on the rest of the Diagonal will continue along the mountainside. 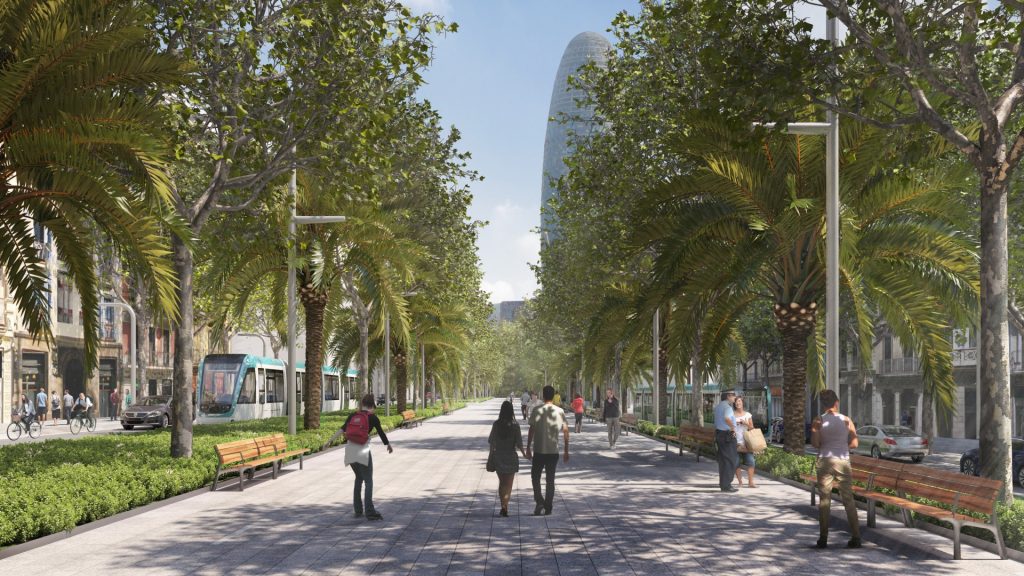 The proliferation of bike lanes

Cycling in Barcelona may seem idyllic to some and disappointing to others. The city currently has a network of 240 kilometers of bike lanes, which has only been expanded in recent years thanks to a favorable policy of the council and an increase in bicycle users. The number of tracks is expected to increase further in the coming years. 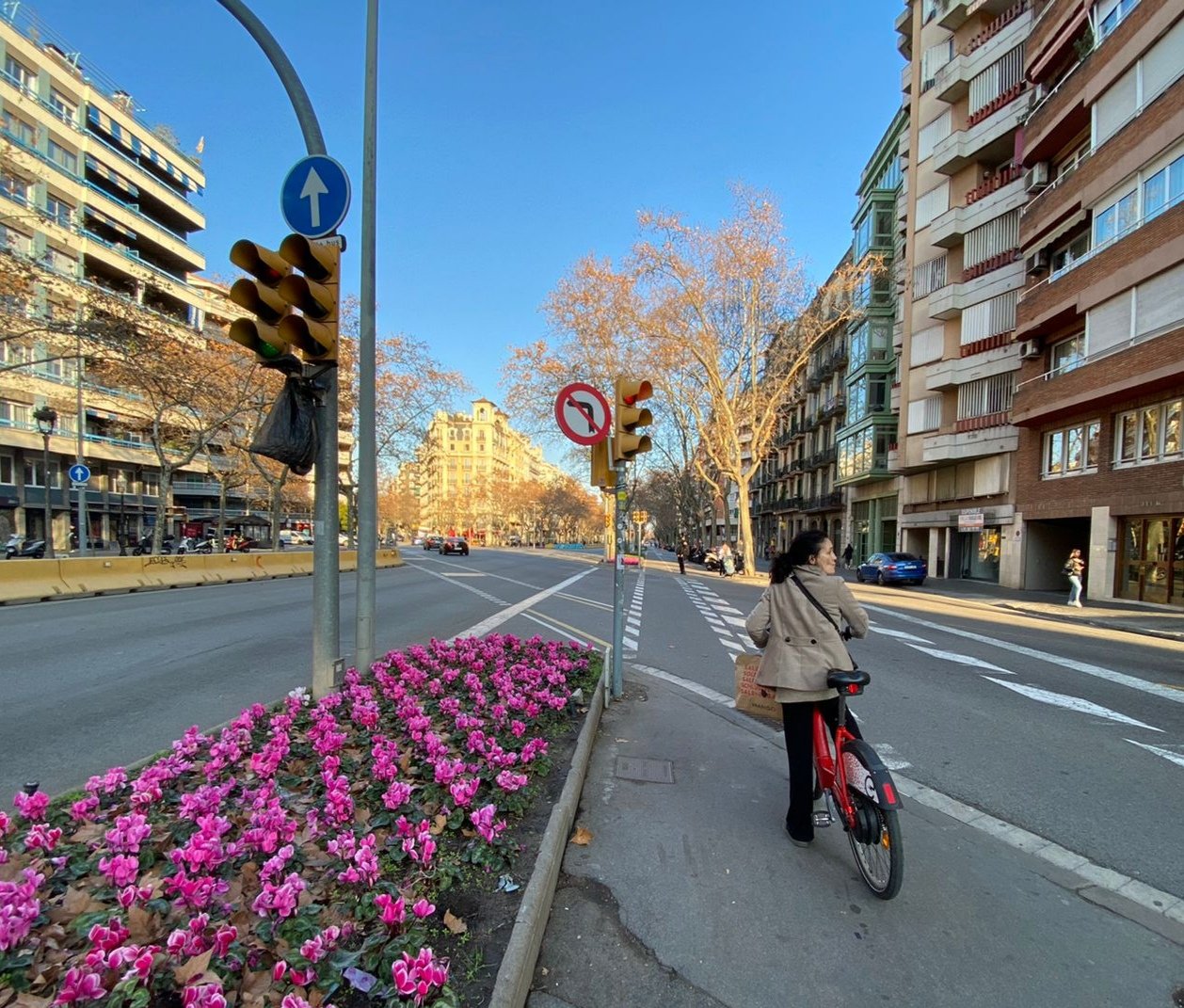 But for the Catalan Cycling Club, although there are many, these tracks are not necessarily suitable. “The network is not clearly defined or really homogeneous. Bicycle lanes are not always well connected, especially on the outskirts of Barcelona. Many roads still pass by the sidewalk, are not wide enough, and there are still areas where they are missing“, Says Adrià Arenas, spokesperson for the association. But in general, Barcelona is a city of reference for cycling in Spain. “Valencia is certainly even better than Barcelona, ​​with a much clearer policy, while Madrid stands out for its absence in this area.. ” 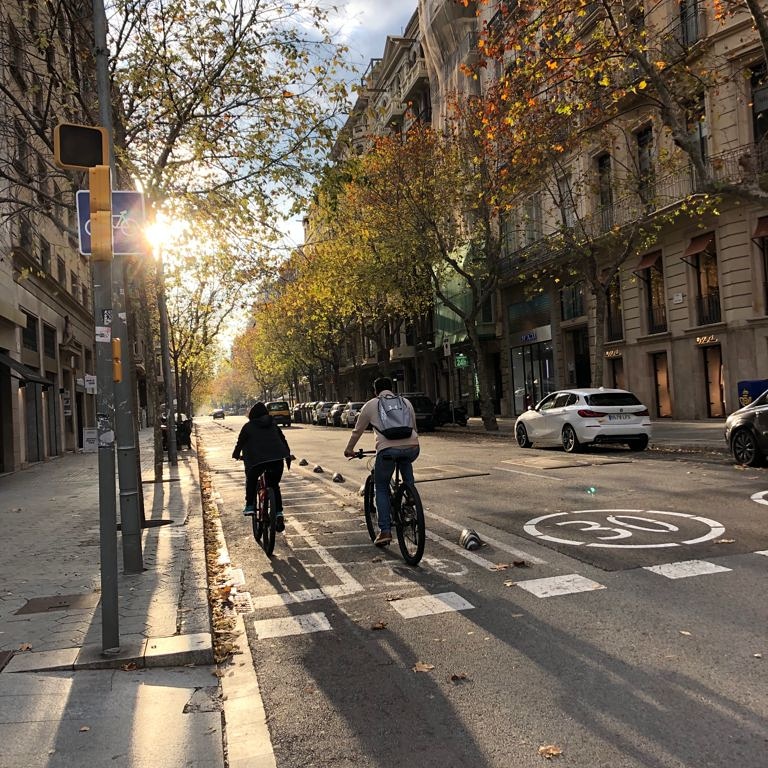 1 million square meters without a car in Barcelona, ​​this is the balance that Ada Colau wants to leave. Municipal teams are doing their homework and should reach this record figure thanks to pedestrian districts (superblocks) already created in the areas of Sant Antoni and Poblenou. Before the end of Ada Colau’s term in May 2023, two more pedestrian districts will emerge in the Eixample and Sant Martí. Specifically, a large pedestrian area will be set up on Provença, Ausiàs March, Nicaragua and Casanova streets and will connect places that are already free of cars, such as Enric Granados streets and Avinguda de Gaudí.

“One million square meters without cars with public transport, green spaces and local revitalization” welcomed Janet Sanz. The deputy mayor speaks no more and no less than one “change of model for Barcelona, ​​making possible the city of the future ”. The budget for the works is 525 million euros distributed between 2021 and 2022.

“The Eixample and Sant Martí pedestrian areas will improve air quality throughout the city” predicts the number 2 of Ada Colau. 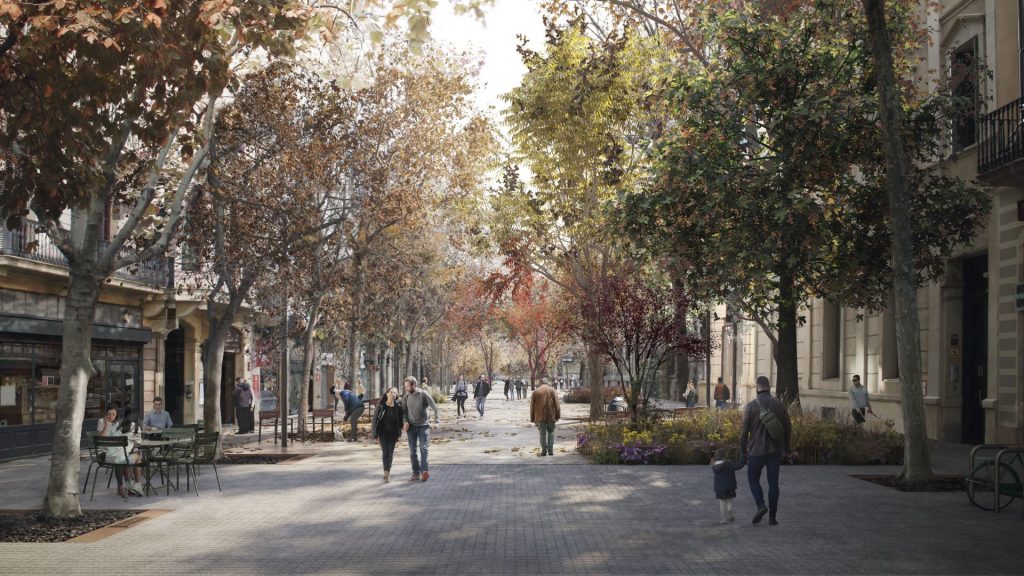 These works in the Eixample echo the pedestrian neighborhoods that have already been built in the neighborhoods of Poblenou and Sant Antoni.

In Barcelona, ​​it is called the “bicibus”. On the Diagonal, a parade of children going to school by bicycle was opened. A moving initiative, but not without claims. Sant Antoni, Arago, La Diagonally, the Bicibus invades the city.

The “bicibus” initiative was born in September 2021, in the spirit of the parents of the students of Sant Antoni. To start the course they had decided to go to school with their children by bike, all together. Today, the idea is conquering more and more establishments, in Barcelona as elsewhere. In the Catalan capital, several public centers now have their “stop” for bicibis, in a total of three “lines”: the Sant Antoni bicibis, the Letamendi bicibus and the brand new Diagonal bicibus.

More than 35 establishments want to take part in the initiative, according to the organizers, and it goes even further. A line has been created, translated into a “bus bike”. sant francisco, in California (USA), last December. Like, cycling can cross oceans.

Obviously, a date between friends on Friday morning enchants the blonde heads who participate. “It’s my favorite day, we can go to school with friends” explained little Aitana, 7, a Equinoxes last November. One mother, Nina, even added: “My daughter would never miss the bike date, she only talks about it all week, she even eats fruit on Friday mornings to have more strength”.

But the reason for the initiative is very different. For parents and organizers, it was a matter of recovering the urban space of Barcelona, ​​where cars still predominate, and fighting with a fun, sporty and ecological means of transport at the same time: the bicycle.