Although human capital is widely regarded as a key driver of economic growth, it is difficult to measure it. The empirical literature intended to construct a measure of this at the national level has combined quantitative (such as average years of schooling) and qualitative components (usually internationally standardized test scores), either using arbitrary weights, often equal, or including -the bear. separately in the estimates, with the result, in general, that it is unlikely that one component is dominant and the other is completely insignificant.

Another weakness of many studies that attempt to incorporate notions of quality into human capital stock measures is that they are based on contemporary flow measures that are often related to students assessed at age 15, which is unlikely to be representative. of skills. of the entire working-age population.

In a recent OECD study (Égert et al, 2022), we address these two weaknesses by constructing a new measure of human capital stock that uses OECD data from the International Student Program (PISA). ) and the International Adult Assessment Program. Competences (PIAAC).

This improvement in aggregate measures of human capital may be important, given the central and driving role that education, training and skills play in economic performance.

The new measure is a cohort-weighted average of previous PISA scores (representing the quality of education) of the working-age population and the average of the corresponding years of schooling (representing the “amount” of education). Contrary to the existing literature, the relative weights of the quality and quantity components are not imposed or calibrated but are estimated directly. Our calculations include three steps.

First, a match is made between the scores of the adult PIAAC tests, the average years of schooling, and the PISA test scores of the students in the corresponding cohort who took the tests at age 15. This correspondence is reasonable because the PIAAC and PISA tests include similar skills: PISA scores cover reading, math, and science; Adult PIAAC test scores cover literacy, numeracy, and problem solving.

Second, PIAAC test scores are reduced by matched PISA test scores and average years of schooling. It should be noted that the results of the estimate show that the elasticity of the stock of human capital with respect to quality of education is three to four times greater than for quantity of education.

Third, these estimated elasticities are used to construct an aggregate measure of human capital stock over time, by aggregating quantity and quality measures for all cohorts of the working-age population. .

This approach is based on the combination of PISA and PIAAC data, in order to overcome the problems posed by the use of one or the other in isolation. On the one hand, the PIAAC provides a measure of competencies for the entire adult population of working age, but this survey has no time series and its national coverage is limited, which makes it unsuitable for analysis by regression. PISA, on the other hand, only applies to 15-year-olds, but very importantly, especially when combined with similar international test results, we have a wider range of chronological and national coverage for this survey.

The new human capital measure for the 16- to 65-year-old population suggests that the countries with the most human capital are Australia, Japan, and Finland, while Chile and Thailand have the lowest levels of human capital below (Figure 1, panel A). These last year’s available rankings are largely confirmed for the stock that covers the 16–39 age population (Figure 1, Panel B), although there are some differences that suggest that younger generations have been more and more educated in some countries than in others. 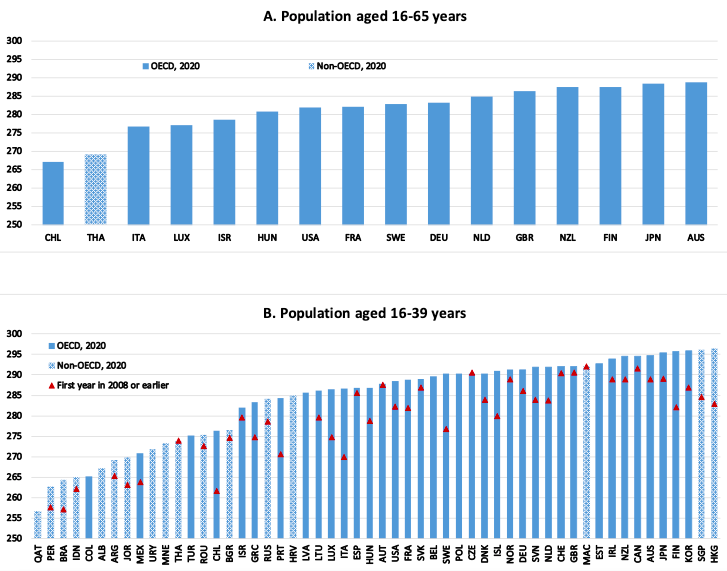 The effects of human capital on productivity: potentially large, with long delays

The new human capital measure shows a strong positive correlation with OECD productivity in cross-country panel regressions across countries, confirming that improvements in human capital are accompanied by increases in macroeconomic productivity.

Another conclusion is that productivity gains through the human capital channel can be of the same order of magnitude as those resulting from improved regulation of goods markets, again using the same benchmark, i.e. the narrowing the gap between the median and the three best-performing OECD countries. . However, time lags are also generally much longer for the human capital channel, especially as it is almost five decades before a sustained improvement in student skills translates fully into an improvement in the skills of the working age group as a whole. . population (Figure 2). These long lead times can be shortened by placing more emphasis on adult education and training, including through lifelong learning and improving the skills of the existing workforce, which which improves human capital at older ages. 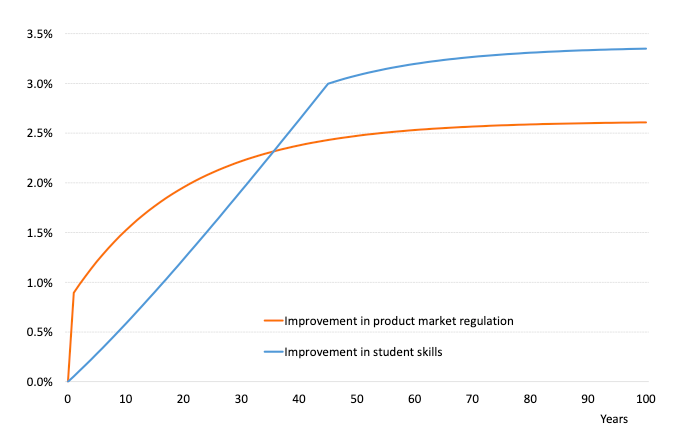 Note: The graph shows the MFP’s dynamic response to a standardized impact on student skills and product market regulation. Shocks are standardized by calibrating the magnitude of the shock as the difference between the average OECD country and the three best performing countries in terms of impact indicator. The shock of human capital means that skills gradually improve as students enter the world of work.

Assessing the effect of educational reforms on human capital and productivity: the example of early childhood education

An interesting feature of the new measure of human capital stock is that it opens up new avenues for assessing the effect of education policy reforms on productivity and per capita income. Any education policy that can be measured quantitatively by an indicator and linked to changes in student test scores can be linked to the new measure of human capital and therefore productivity.

Take the example of early childhood education. The first step in quantifying the effect of daycare may be provided by the existing empirical literature, which states that students who attended daycare for more than one year have a better performance in students’ skill tests, improving their test scores between 8.2 and 9.6 points. This corresponds to an increase of 1.7% to 1.9% compared to the OECD average PISA score in 2018.

Future work will focus on a systematic evaluation of a wide range of educational policies on the new measure of human capital and macroeconomic outcomes, as well as on examining the impact of adult education policies on human capital.

She supports Telos.
(and benefit from a 66% tax reduction)