It’s the end! However, Ford doesn’t want to see his S-Max die! This elegant minivan, in line with the Renault Espace, caused a stir in 2006. Dynamic, lowered compared to its competitors at the time, it was innovative because of its dynamic nature. Sixteen years later, his former success is sadly just a memory. Renovated in 2015, it was equipped, before its withdrawal, with the ultramodern hybrid engine of the Ford Kuga SUV. Gasoline-electric technology close to that of Toyota, with a planetary gear train of CVT effect, the variation of the ratio of which is controlled by an electric motor that acts as a generator.

Despite the joint patents, the engines and the box called e-CVT are indeed of Ford origin. The front wheels are powered by the electric propulsion engine that announces 125 horsepower, or the large atmospheric 2.5 of 152 horsepower, or both if necessary. But the two powers do not combine! Electric traction works with a 1.1 kWh lithium ion battery that can travel between 2 and 3 kilometers in zero emission mode. Not much. But the system recharges quickly when braking.

We find what made the S-Max charming, that is, an original line and generous living space. Accessibility is handy, though it doesn’t look extraordinary in the front seats due to an overly rounded roof arch. Ford has also studied the functionality well, with sliding and individually adjustable rear seats. The third one disappears, he, perfectly in the ground of the trunk, conserving a great prey. So we have all the advantages of the real minivan. We also appreciate the brilliance, despite the thick mounts in front.

The dashboard is more opulent than the previous one before 2015, with fewer fake plastics. The build quality seems to have improved. But the crunch and squeaks, incongruous in a car of this price, have not yet been erased. Damage on the wrong track. The driving position is good. The seats properly support the back when taking the curves. But we regret the uniform black atmosphere. It seems that Ford has completely forgotten about interior colors a few years ago, which in the 90’s and early 2000’s made their cars warm. Why this darkness? Sure, it simplifies manufacturing with fewer variants on an assembly line, but it’s sad. Fortunately, the equipment is provided, as usual at Ford. But the ergonomics seem a bit messy at first glance. With a little practice, though, we’ll appreciate setting up security alerts with a button on the left, behind the wheel. However, we will criticize the pre-collision warning, thunderous and too sensitive, which screams brutally and often, in case of danger … imaginary or at least very unlikely. Quickly irritating.

Driving is smooth … Like the Kuga. 2.5 purrs. The set is quiet, unctuous, felt. Without the usual Toyota defect. By simulating fictitious reports during acceleration, this S Max avoids the unpleasant moped effect. The car is nice, without the slightest shock. We still regret the impossibility of changing gears manually. Even if they were reassembled, it would give more engine braking. It also lacks an “S” mode. which would make this heavy car more sensitive. Because accelerations and climbs are mediocre, no shine. The “L” mode certainly slows down the download speed, but too much, lacks a bit of discernment!

Thanks to an Atkinson combustion cycle, this The big vehicle is still very cheap, with an average consumption of 5.5 liters of unleaded. An excellent record, which literally surprised us. Even if we played the game with very quiet driving and little highway, the playing field less favorable for hybrids. These models in fact become much more voracious on the highway! Where they behave best is in the city. 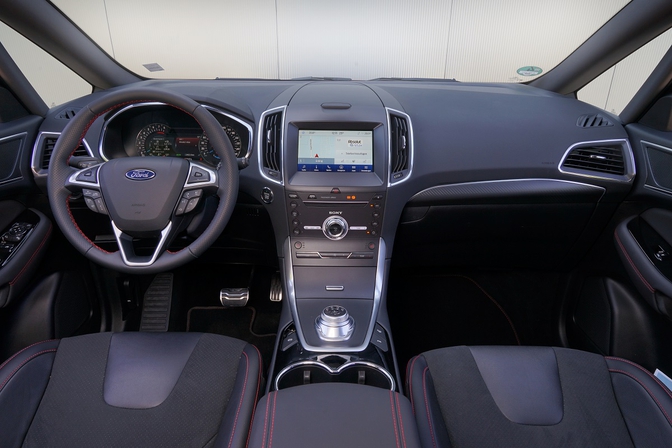 Road maintenance is safe, as in all recent Fords. Driving does not update any particular errors. The car stays in its trajectory, both in a straight line and in curves. But the operation is clumsy. You notice the huge overweight. We also deplore a large turning radius when maneuvering, which makes it difficult to enter and exit underground car parks. Most of us are not enthusiastic about comfort, served by supposed sports suspensions and (optional) huge 19-inch wheels with low-wall tires, which collide with all the unevenness that has been dug into our pavements in recent years. For a family car, the supposedly sporty writing of this S Max in the ST Line test version is not natural. Too much dry trembling is tiring! This is especially true at low speeds. Because as soon as the pace increases, so does the comfort. In addition, the plastic side additions of this ST line reduce the distance to the ground. Watch out for the sidewalks! 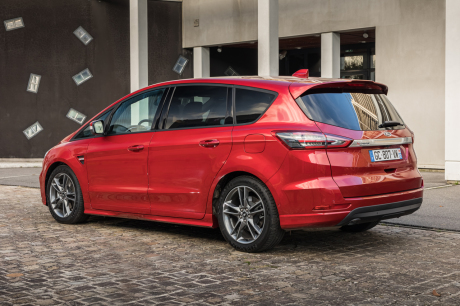 The price starts at 48,150 euros in the Titanium Business version, slightly refined, but preferred. Because more comfortable. Our ST Line amounts to 49,950 euros. La Vignale, much more luxurious, reaches 56,650! The S-Max is only available on this engine. The excellent diesels have disappeared from the catalog. It is obviously bigger and available in seven places, but the 7,300 euros more requested compared to the similarly equipped Ford Kuga SUV is a bit incomprehensible. The late-life S-Max is priced much higher than its younger cousin.

Also, bad news: the S-Max requires at least 740 euros penalty. And last but not least, the fans of the government have added a tax to the weight they serve … big, hybrid vehicles that are necessarily heavier for batteries! Smart. Therefore, the 1.95 tons of the machine are paid with a 1,500 euro surcharge as a bonus. And that, while the Kuga hybrid, lighter than 250 kilos, is not subject to it. Therefore, the S-Max FHEV suffers at least more than 2,200 taxes. For a vehicle that wants to be “green”, it will bother the barge. This is all the more unfair as consumption is really low. This S-Max has no direct competitor, since the disappearance of the Toyota Prius + minivan. Therefore, it is still the only hybrid of its kind. With many qualities, including driving pleasure that adds to its functionality. But the Franco-Franchouillard tax mix will penalize him.