In March, Enki Bilal signed the third volume of Error, a saga first published in 2017. The designer imagines the sudden disappearance of all digital data stored on earth. Humanity is suddenly deprived of memory, for lack of access to the Cloud. An album box gives rise to a curious deja-vu impression. Two figures are each sitting at the end of a huge table. “She measures almost 7 meters, the safety distance requires”, indicates the text band. How can we not think of the February 7 meeting between Vladimir Putin and Emmanuel Macron in the heart of the Kremlin? Obb’s face, the character created by Enki Bilal, is adorned with a blue dot. Intrigued, her interlocutor is cautious, she fears contagion. A few pages earlier, it was presented: “New Tsarina of Russia”. In chest, Obb the judge “unpredictable, neurotic, obsessive”. Amazing premonition! The meeting was held more than six months ago. “It simply came to our notice thendefense Enki Bilal. I see the world go by. The news feeds my inspiration. I invariably start my day reading the press, often two or three times a day. ”

Fragments of the complete Monster. Enki Bilal projects his stories “in a twenty-year horizon. I observe the world in motion, extrapolating it from what is already in place.” (Monsters, Enki Bilal © Casterman 2018) 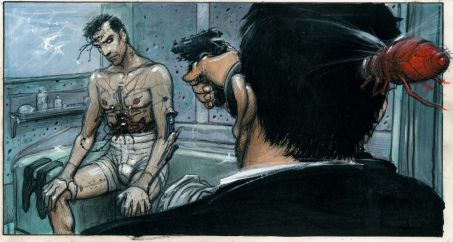 This is not the first time the designer has anticipated reality. In The sound of the monster (1998), had staged a religious international that orchestrated the explosion of a tower in the heart of a city. Before September 11, 2001. Enki Bilal, however, refutes the term visionary. “Extrapole of what is already in place”. It is projected in the near future, “a twenty-year horizon”. Thus, in Bug, book 3the action takes place in 2042 … On the album Hunting game (1983), produced with Pierre Christin, had already predicted the end of communism. “In fact, history has begun to bring us up to date. In Poland, the strikes ignited the Gdansk shipyards. We witnessed the rise of Solidarnosc, led by Lech Walesa.”

Enki Bilal confesses to being familiar with geopolitics: “It’s tied to my origins.” The cartoonist was born in Belgrade. The city was then the capital of Yugoslavia. Marshal Tito imposed his government on the country. The iron curtain, the dictatorship of the one party, the cult of personality are concrete notions for him, even if at that time he was only a small child. He was not 10 years old when he arrived in Paris in the early 1960s. He remembers, happily, his learning of the French language. “It was like love at first sight and I devoted myself to learning it and pronouncing it with delight.”

Hunting gamewith Pierre Christin, and three books by Jules Verne and Ray Bradbury published by Gallimard. Discovered by the publisher in 1972, Bilal illustrates these covers. It was then that he met Pierre Christin and began his career.

At the same time, he is frantically engaged in drawing. It is their refuge. “Perhaps a way to escape family dissension,” he admits. He also remembers the weekly movie sessions his mother took him to and his sister. Westerns, peplums … After each film, draw figures inspired by projections. It was also the time when he discovered comics in the French language. Read the magazine diligently Pilot. At the age of 15 he wrote in the newsroom and dared to come and present drawings. “The first graduate!”kindly ordered René Goscinny. “I followed his advice”, laughs the designer. In 1971, he was accepted to the Paris Fine Arts Competition. Just a quick walk down the rue Bonaparte. “Three months … no more!”

Two boards he had sent Pilot then win a prize. The following year, the weekly published its first comic strip: The Cursed Bowl. In Gallimard, Pierre Marchand has just created the “Folio junior” and “1.000 suns” collections. He spotted Bilal’s talent and asked her to illustrate the covers of the novels by Jules Verne, HG Wells and Ray Bradbury: “Authors read passionately when I was in high school.” This is the meeting with Pierre Christin, the screenwriter of Valerian, which gives the true beginning of his career. Between 1975 and 1983, they co-signed five albums. The penultimate, Phalanges of the Black Order (1979), is a success that goes beyond the circle of comic book readers. On the set of the show Apostrophes, Jorge Semprun praises the quality of the texts as well as the drawings. The next record, the famous one Hunting game, will benefit from an even greater notoriety. Meanwhile, the designer signs solo The Fair of the Immortals (1980), first volume of The Nikopol trilogyFollowed by The Woman Trap (1986). For the first time, Enki Bilal applies color live. A technique to which he will remain faithful. 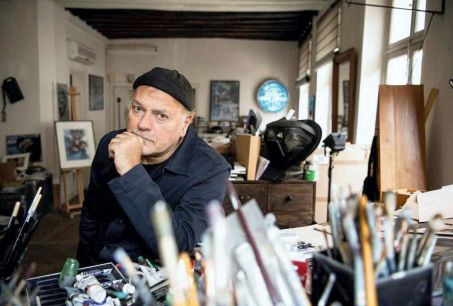 A stone’s throw from the church of Saint-Eustache, in his Parisian studio, are scattered on the table. Surprise: these are not traditional boards, but boxes made one by one and in large format by the artist, who then assembles them. Another table is full of acrylic tubes, brushes and cakes. Enki Bilal returns from Angoulême. At the Comic Festival, he presented a montage of his films, “a compression, like an installation”, He said. It’s just that he’s not just a cult cartoonist, he was awarded the Grand Prize for Comics (1987) in this same show. He is also the director of three films, including The Unforgettable Hotel Bunker Palace (1989), depicting a drifting dictatorship.

Hotel Bunker Palace. The first of his three films, made in 1989, depicts a drifting dictatorship. 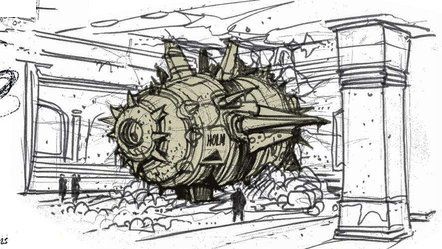 Sketches for Romeo and Juliet, directed by Prejlocaj (first), and for the film Bunker Palace Hotel (above). For his non-comic projects, drawing is still essential.

The stuffed head of a zebra usually watches his desk. It currently hangs on the picture railings of the Musée de l’Homme. Echoing the exhibition At the borders of the human being, was offered carte blanche to the artist. Its boards offer extended human silhouettes with digital implants, mechanical prostheses … “I never would have imagined that my work would fit so well into this subject”, he asks. The naturalized head of the horse inspired Enki Bilal to create a hybrid creature, half horse and half zebra. She crosses the album Animal’z (2009), in which an ecological catastrophe alters the natural order of the planet. In the exhibition, he borders a canvas painted in acrylic. The animal’s stripes merge into the chessboards of a chessboard. Is it a nod to the chess-loving character who gave the series its name? Nikopol? “In Eastern Europe, everyone plays chess!” Enki Bilal smiled.

For his hero, who also loves boxing, the designer invents a sport that combines the two disciplines. He baptizes him chess-boxing (Ecuador Ecuador, 1992). A fiction that has come true. Today, there is even a French federation of chess boxing! Enki Bilal, or the watchman of tomorrow. 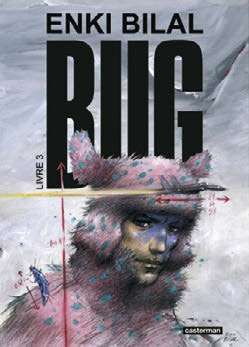 At the borders of the human being and White letter to Enki Bilal, exhibitions at the Musée de l’Homme until June 13. www.museedelhomme.fr