If I had to buy a second car from my wife, I would try to get her a Toyota GR Yaris. I just need to make sure the kids don’t grow up too fast, so they don’t touch the ceiling with the top of their head. If my wife can choose a car from the Toyota showroom, she will probably choose the Yaris Cross. Because there’s something beautiful in its design, because it sits much higher up, and because it will have a hybrid car that doesn’t need to be plugged in to be economical. Are you right?

After a period in which Toyota made mostly boring cars, sometimes downright ugly, the Japanese are returning a little design of its range. And the Cross of Yaris is a good example. The bodywork seems to have a greater distance to the ground than the direct competition, while the angular wheel arches with contrasting ornaments give the design something adventurous. I also like the rear light sets wrapped in a black design element, like the ones that also adorn the normal Yaris and GR version. He rather feminine lines make my neighbors describe the Cross as a real woman’s car. Whatever that means.

Toyota claims to be a hybrid specialist, and rightly so. The Yaris Cross is based on a three-cylinder 1.5-liter 92 hp that is backed by a 59 kW electric motor, with a total power of 122 hp. This is one hybrid called “auto-recharge” that you don’t need to plug in to get there low consumption values. I ended my testing week with an average fuel consumption of only 3.9 l / 100 km ! Without having to really pay attention to it.

The hybrid propulsion system makes the Toyota Yaris Cross not only economical but also very enjoyable to drive. However, when kept within city limits, this SUV surprisingly it often switches to all-electric mode. In addition, the e-CVT planetary gear system provides smooth transitions.

What I can also appreciate, even if it is not a point of sale in our region: you can also order the Toyota Yaris Cross with four-wheel drive. Of course, this does not make it an all-terrain vehicle, but it does make the adventurous SUV much more believable. 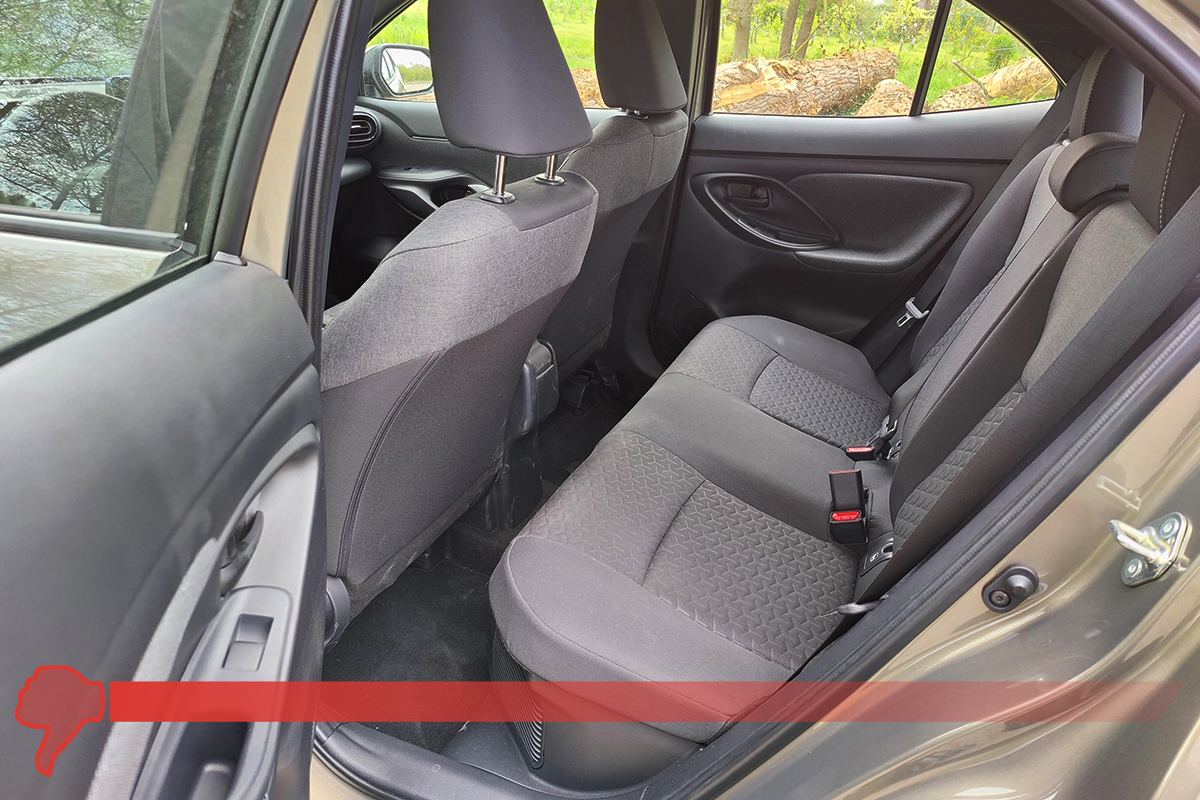 The Cross not only takes its first name from the Toyota Yaris, especially in the interior, where you can see the relationship between the SUV and the city car. The instrumentation has been copied identically and that’s a shame. The digital counter is easy to read, though its design is quite obsolete. The new multimedia module Smart Connect with the MyT app for your smartphone it’s a step in the right direction, but the screen could be turned more towards the driver to improve readability while driving.

Another thing that should no longer be possible in 2022: the The language of the display is not related to the language of the information and entertainment system. Therefore, you need to search the settings twice. Either way, as a Toyota Yaris Cross owner, you usually have to do this once. Also annoying: buttons for heating the steering wheel and the rear screen, among others, are hidden on the left side of the steering wheel. The door module for adjusting the side mirrors and operating the power windows is also partially hidden from view by the driver.

With a length of just under 4.2 m, the body of the Toyota Yaris Cross remains compact, which is not without consequences when it comes to getting in and out of the car. The door opening is very narrow and the doors do not open enough. The position of the front seat is good, but the seats are too hard and too short. The volume of the trunk is 397 liters, with the rear seat folded down (in three parts as an option), you have a storage volume of 1097 liters. In addition, the Cross has a double floor divided into two compartments longitudinally. For your information, the four-wheel drive version contains only 320 liters.

The hybrid powertrain is less enjoyable on long trips. The Toyota Yaris Cross not only lacks punch, but also makes a lot of noise on the highway. This not only refers to the three-cylinder engine crying a bit, but also to theloud driving noises entering the cabin at higher speeds. And you also have to get used to it the e-CVT coffee grinder effect.

My wife is always right, even when she is not. But maybe Gazoo Racing could compromise and develop a Toyota GR Yaris Cross?