Mahault, Chloé, Hugo, Laura, Erwann, and Asmae pressed the orange Notify Us button to tell us about the science project they’ve been working on for several months. These 5th graders from the Saint-Ursule de Forest Institute are taking part in CANSAT BELGIUM, a science competition in which they have to make a 33 cl tin-shaped satellite. They have already made it to the semifinals and, during the final, their satellite will be powered by a mini-rocket. The winning team will represent Belgium in the European competition CANSAT.

“We are a team of six young science enthusiasts. We are taking part in the CANSAT adventure, a science competition. The name of our team is AstroCan. We would like to talk about ourselves if possible.” Mahault, Chloé, Hugo, Laura, Erwann and Asmae, all 16 years old, pressed the orange Alert button to tell us about the science project they have been working on for several months.

These students of 5i Saint-Ursule de Forest Institute participates in CANSAT BELGIUM, a science competition organized by Wallonia, the Brussels Region and the European Space Education Office ESERO Belgium. The goal of this project? “To stimulate vocations in the scientific and technical careers of young people “explains Elise Munoz-Torres, organizer of the CANSAT BELGIUM competition for Wallonia.

The idea is to wake up 5 year oldsi and 6i secondary to science by carrying out a scientific project in the space field. “It’s about building your own 33 cl can-shaped satellite (sat) and flying it with a rocket”details the Walloon organizer of the competition.

Launched in 2012, this competition attracts more and more young people from all schools in Belgium. During the first editions, less than 15 teams registered. But that number rose sharply to more than 30 entries today. “For this 2021-2022 edition of CANSAT BELGIUM, we have received 33 applications, all selected after the selection based on the eligibility criteria”points out Elise Muñoz-Torres. The can, modeled in software and then printed in 3D

It is in the Brussels region that registrations are most numerous. 19 teams in total and among them, our 6 students from the Institut Saint-Ursule de Forest. They met the project in September 2021, through the school. “Our science teacher took advantage of his class time to present this competition to us in a very dynamic and enthusiastic way.explains Chloé, one of the members of the group. He really likes this project, but last year he was unable to participate due to Covid. So I was very excited to share it again and it made a lot of students want it. “ The students were quickly motivated by the challenge and the AstroCan team was formed. “We all wanted to participate, and especially attend the presentation”, rejoice. But before attending this long-awaited release, we first had to meet the requirements of CANSAT. “We had to create a tin-shaped satellite that had two missions to accomplish.”developed by AstroCan members.

The first mission, called the main mission, is mandatory and identical to all the teams participating in the contest. This involves taking temperature and atmospheric pressure data and sending it in real time to a ground station. Then you need to land the satellite in the form of a tin can gently. “Our can will be placed on a rocket and will be sent to a height of 1 km. When the rocket reaches this height, it will deploy the different cans inside and the cans will have to remove its parachute.”, says Chloé. Students have to create this famous parachute themselves and think about how it can be opened to offer a controlled landing. “The can must respect a certain speed when going down and will take the data during its descent”the 16-year-old girl continues. Five of the six members of the AstroCan team (DR)

In addition to this first mission, which is already very technical, participants are also subject to a secondary mission, specific to each team. In fact, students have to imagine an additional scientific goal to achieve. “We had the idea to reproduce an ultrasound at a distance. We were inspired by the problems of astronauts. We follow, for example, Thomas Pesquet on Instagram.”, develops Chloe. The interest is, according to them, to show that it is possible to be treated remotely in case of illness. “Our teacher took part in this competition for a few years and told us that she had never come across such projects, which was out of the ordinary.”she slips, sure. 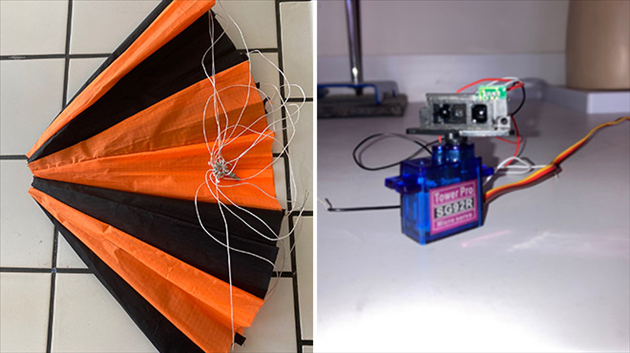 The parachute and the device for remote ultrasound (DR)

To carry out their project, the colleagues meet three times a week, at lunch time. “It simply came to our notice then.admits Chloe. We need to move forward as soon as possible because we have several reports to submit and no delays are allowed. ” Since October, the 6 candidates have been working hard on this mission, in particular to be ready for the semifinals of the competition. “We had to show globally what we’ve done so far, re-explain our mission, do a PowerPoint … We had to summarize our project as much as possible in 5 minutes.”

It was a relief when we went, especially because we met teams with a very good level

The event was held on March 23, at the ULB. “We were not under so much pressure until it was our turn.she says. We were prepared but I think we were especially apprehensive about the questions they could ask us, fear of not understanding or not being able to answer because we hadn’t thought about them … ” It should be noted that the entire competition is conducted in English, from the oral presentation to the drafting of reports, through discussions with members and professionals. “We are all 6 in diving so language is not the hardest”recognizes the student.

During this semi-final, the jury of experts selected the 24 best teams and our apprentice scientists from Brussels had the opportunity to continue the adventure. “It was a relief, especially because we met teams at a very good level. Really, we were relieved because we had to wait all day to see if we passed or not. But I think we still did well, I couldn’t to pass”.

Although AstroCan members say they are happy to continue the adventure, Chloé tells us all that for her, the goal is not necessarily to win the contest in May. “In our team there are members for whom it is very important to win. And for others, it is more to get rich, to discover new people, to practice the language … I, my goal is to reach the end but not. Necessarily I want to succeed in the launch and get the graphics done with the data we will collect. “

It is now the last straight line for our budding scientists. “We’re doing the latest radio tests to collect the data. We’re getting to the end and we’re cleaning everything up. We still have to test putting all the components in the molded can, but hey, that’s a little technical.”she jokes.

The grand final of the Belgian competition will take place in early May. It’s a bit “the pinnacle of competition”, as defined by Elise Muñoz-Torres. The event will last 3 days and will take place at the Elsenborn military base in the province of Liège.

Only one team will be crowned the winner, depending on their performance throughout the project, the flight of their satellite and the final result. “The winning team will have the privilege of representing Belgium during the CANSAT European competition organized by the European Space Agency”, the organizer of the competition for Wallonia is happy. CANSAT BELGIUM is, in fact, the result of a European competition launched in 2010 by the European Space Agency (ESA). The European competition will take place from 20 to 25 June 2022 in one of the countries of the European Union. “It would be nice to get it, but I think it has to be difficult to manage, especially during exams.”points out the student at the Saint-Ursule de Forest Institute. “It’s not what I want, but if we’re the first, I’ll be very happy too”she concludes.