To know for sure whether his own reality is a physical or mental construction, and to really know himself, Mr. Anderson will have to follow the White Rabbit again. And if Thomas … Neo … has learned anything, it is that this decision, however illusory, is the only way out of the Matrix, or to enter it … Of course, Neo already sap. done. What he doesn’t know, though, is that the Matrix is ​​more powerful, more secure, and more fearsome than ever. As a deja vu …

From Matrix (1999) and its sequels (2003), Matrix Resurrections co-written and directed by Lana Wachowski was an essential fourth part? Frankly not: contrary to what the Marketing claims, this refs is not “better than the original”. Extremely long, especially confusing and quite violent, Matrix Resurrections has no interest other than to allow fans to find the two main actors in the trilogy, Carrie-Anne Moss (Trinity) and Keanu Reeves (Neo) but on the other hand Morpheus is played by Yahya Abdul-Mateen II instead of Laurence Fisburne . Filmed with great technical means, mostly in Babelsberg in Germany and also in San Francisco, Matrix Resurrections benefits from John Toll-inspired photography, impeccable but soulless special effects and the involvement of the actors (see bonus on his final jump). But despite all these assets, the film fails because of the banality of its dramatic plot that goes back to the past of the two heroes in the form of countless flashbacks, quite useless for fans of the trilogy and too numerous to be assimilated by a “first time viewer” of Matrix. The trilogy had marked the history of science fiction in cinema for its innovations (Bullet Timemetaphysical reflections, numerical pretensions) that we find in Matrix Resurrections without any degree of additional innovation. Certainly, Neo is still locked in his existential contradictions and Trinity is still an endearing futuristic muse, but the modernization of his characters, to stick to more current concerns, is far from exciting. Wanting to detect a part of the revisited creation that would break the codes of the trilogy seems very cerebral, and in any case, the result is unattractive, even boring. Especially because the forged romance between Trinity and Neo has a hard time coming out of an abstruse and downright unlikely plot. As for the staging, it constantly replaces a superfluous visual frenzy with the absurdity of the narration, as if the form could mask the emptiness of the background! Matrix Resurrections never innovates but is content to rework the elements of Matrix of which a new (recommended) visualization will suffice to show how revolutionary the original was and how insipid this new installment is despite its undeniable nostalgic flavor. Essential. 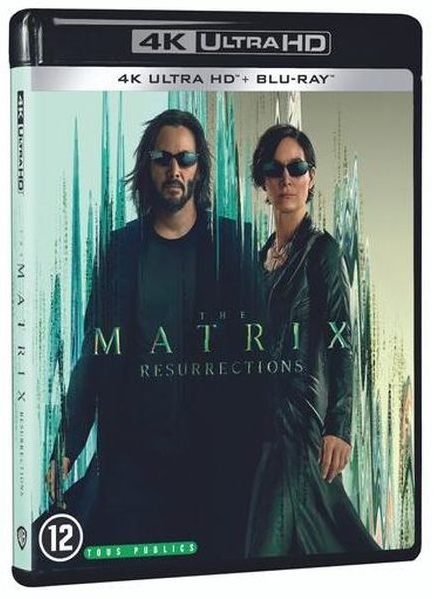 Seva : English mixture Dolby Atmos, clear and well-focused dialogues, excellent dynamics on action atmospheres and the energetic music of Johnny Klimek and Tom Tykwer, a very sophisticated spatialization that makes the most of the possibilities of height channels to restore stunning vertical surround effects ( rain) while all the rest of the space is really immersive, very effective solid LFE, a DD version 5.1 is available with less amplitude but at a higher sound level; VF Dolby Atmosclear and dynamic, clean dubbing and guaranteed surround effects, much less extensive in the VF DD 5.1