Scientists from Saga University and Adamant Namiki Precision Jewelery Co. in Japan they announce a discovery that could help improve memory management in the field of quantum computing. They would have found a new technique for making “ultra-pure” diamond disks about 5 cm in diameter that can be used for quantum memory. Scientists claim that the very high purity of the diamond allows it to store an impressive amount of data, the equivalent of a billion Blu-Ray discs.

Quantum computing is still in its infancy and many challenges remain, such as inconsistency, reliability of results, quantum noise, and memory management. But Japanese scientists have announced that they have taken a step closer to solving the latter problem thanks to a new diamond disk architecture. In fact, very high purity diamond is one of the most widely used components in the development of quantum computing. This type of diamond is used for quantum memory found in quantum computers and ultra-sensitive magnetic sensors.

One of the specific defects in the crystal structure of diamond, called the nitrogen vacancy center (NV center), can be used to store data in the form of superconducting quantum bits (qubits), but the excess nitrogen in the diamond alters. their quantum storage capabilities. . Scientists then had to choose to build: large diamond disks that contained too much nitrogen or ultra-pure diamond disks that were too small to be useful for data storage. The commitment is therefore to build ultra-pure diamond discs large enough to be used. 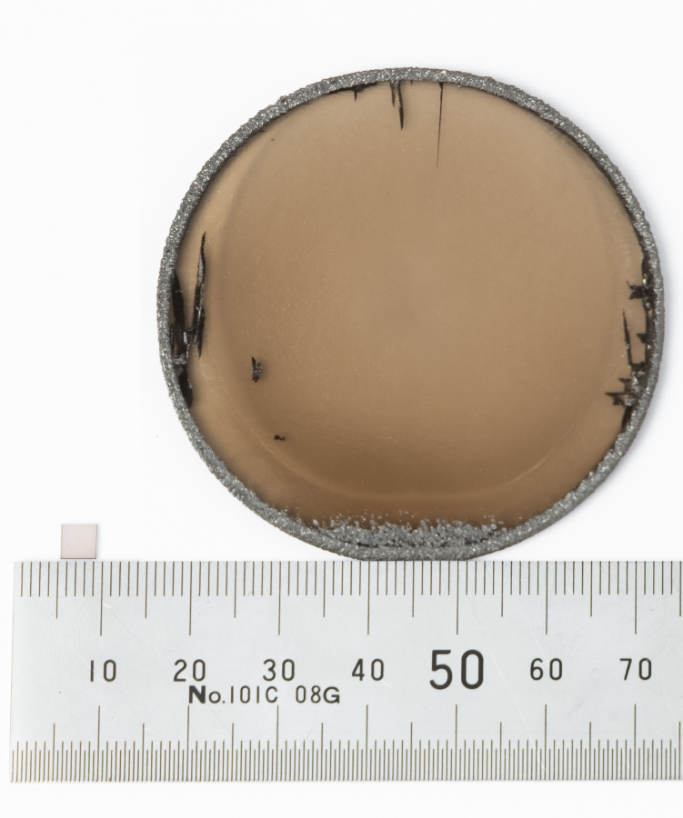 According to scientists, development is accelerating, but until now, usable diamond disks only had dimensions of about 4 mm in diameter. What has been developed now is a very high purity diamond disk with a diameter of 5 cm. They believe that this disk should drive the realization of quantum computers in the future. The team claims that this disc has such a data density that it can theoretically store the equivalent of a billion Blu-ray Discs. Assuming it’s a single layer, a Blu-ray Disc can hold up to 25GB of data.

This means that this diamond disk should theoretically be able to store 25 exabytes (Eo) of data. The team calls these records “Kenzan Diamond”. The key, he says, is that these diamonds have a nitrogen concentration of less than 3 ppb (parts per billion), which makes them incredibly pure. He also claims that these are the biggest records with this level of purity. Of course, obtaining this result requires a new manufacturing technique. Diamond discs were previously made by growing the crystals on a substrate material, which is usually a flat surface.

The problem is that the diamond can break under stress, which degrades its quality. In the new process, the equipment made a relatively simple change: the surface of the substrate took the form of steps, which distribute the stress horizontally and prevent cracking. This allows the equipment to make larger and purer diamond discs. He hopes to market these diamond discs by 2023. In addition, he has also announced that he is already working on how to double their diameter to increase it to 10 cm.

Meanwhile, many scientists agree that quantum computing is still far from a reality. However, an increasing number of companies claim to be making remarkable advances in quantum computing; some of them are already marketing services based on quantum computing. Therefore, there seems to be a disconnect between the quantum physics research community and companies. Many call this hype and point out misleading advertising around technology.

Last July, Victor Galitsky, a Russian-American physicist and theorist in the fields of condensed matter physics and quantum physics, said he feared that investors would fall victim to an intellectual Ponzi scheme. quantum computing is a bubble, which sooner or later may be. collapse and ruin legitimate research and innovation efforts. This situation could also irreparably damage the reputation of science and scientists at all levels. The hype surrounding quantum computing is bad for science, he warned.

Being a little familiar with quantum physics and having spent time trying to figure out how the new quantum industry works, I am increasingly concerned that the recent uproar around quantum computing is an intellectual Ponzi scheme that is self-perpetuating, a bubble, which may be sooner or later. then collapse and take with it legitimate research and innovation efforts. Sure, there are gems in this “quantum technology space,” but they are very rare. Most quantum IT companies are, at best, elusive and held back by a large and growing influx of funding, which is not based on any rational thinking or reasonable expectations, Galitsky said.

What is your opinion on the subject?

What do you think of the storage technology developed by Japanese researchers?

Do you think this represents a breakthrough in quantum computing?

Quantum computing suffers from a hype, according to physicist Sankar Das Sarma

The hype around quantum computing, an intellectual Ponzi scheme? A professor of quantum physics fears it will tarnish the image of science