This Monday, April 25, the capital of the Côte d’Azur has given us an appointment for the opening of the Salle des Franciscans in the Place Saint François. A long-awaited inauguration that marked the launch of a series of adventures and a fresh start for the Nice National Theater. On this occasion, the “small” room full of history received patrons and other guests of the TNN for an exceptional evening under the sign of creation, adventure and excitement.

The whole culture had the honor of being invited to this happy event and of attending the dressmaker of Isabella Rosselini’s already sold-out fashion show. Darwin’s smile, directed by Muriel Payette-Holtz, current director of the CDN. The evening continued with a new cabaret piece performed by members of the TNN troupe, and “after the verses, a drink”! 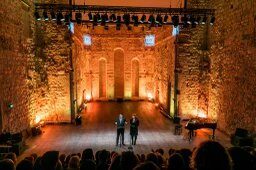 The Théâtre de Nice is being reinvented

Monday 25 April 2022 will remain a memorable date in the history of Nice’s cultural life and for the great artistic revitalization project carried out by the Mayor of Nice, Christian Estrosi, which aims to make Nice the European Capital of Culture. in 2028. Opposition actions by the Socialist Party and environmentalists alleging a “financial and environmental scandal”, the TNN created by Yves Bayard in 1989 and the Acropolis Exhibition Center will be effectively destroyed by give way to the “Promenade du Paillon”. In this context, the Teatre Nacional is seizing new spaces, scattered from east to west of the city, to further open access to culture.

From January 2022, TNN abandoned its old buildings to go outside the walls to different places, such as the Opera, the Francis Gag Theater, the Nice Nord Forum or the Lino Ventura Theater to offer cultural proposals to the Nicene. . Many artistic and educational projects have arisen under the direction of Muriel Mayette-Holtz, who has been appointed head of the Theater since 2019. After joining the Comédie-Française in 1985 as an actress, she has since pursued an amazing career. and has shown unwavering dynamism since the beginning of his tenure at TNN. Around the 2021/2022 season he has imagined free meetings and educational projects in the heart of the city, with orality classes, meetings with big names in the art scene and readings of stories to share with the family.

It is, therefore, a relieved and enthusiastic TNN team that we meet this Monday evening, happy to take a new step: “It is an incredible opportunity to be able to open a theater, it is unique; and this year we’ll do it three times, so the excitement is at its peak, “says Muriel Mayette-Holtz. to the practice of the show as soon as three more spaces (The Kitchen, the Iconic and the Palace of Arts and Culture). “Passionnément TNN” promoted by Benjamin Mondou and his wife, present during this inauguration, whose aim was to promote the endowment fund created in March 2022 to develop the access of young people to theatrical performances and meet remote audiences such as EPHADs, institutes or trips to the inland valleys of Nice.

“Actors can help science”: this is what Isabella Rossellini is trying to show her audience in her show full of stories and humor, and it’s a pretty successful bet. Sliding from one character to another, he gives a kind of lecture on Charles Darwin’s theories of evolution, which gradually becomes a great theater lesson. With a calculated and charming tone, it shows how empathetic, necessary for the actors, allows an elaborate study of the life and behavior of animals. The Italian-American actress and director manages in this work to reconcile “the two loves of her life”, apparently opposite: scientific research and interpretation. Her captivating imaginary box is staged by Muriel Mayette-Holtz, according to a sober and modern scenography with a good measure of digital interventions, giving way to the sincere performance of Isabella Rossellini.

Nothing better to open the Franciscan scene than a creation and this face to face between the actress and her audience. “The show that will somehow mark the DNA of Franciscan programming must be beautiful, accessible, moving and really talk to us, teach us something,” says the director of TNN. Muriel Mayette-Holtz is committed to moving the boundaries between science, poetry, philosophy and math and offers both emotional and interesting quotes. Thus, although the Franciscan room is completely modular and we hope to discover more alternative configurations, this first performance was more adapted to a frontal scenography. “You have to discover the possibilities of this room little by little and, therefore, we will put the bifrontal position on stage from next season. But we have to keep in mind that it is essentially the show that dictates the configuration “, confirms the director.

Just out of this beautiful journey into Isabella’s ethological-dramatic universe, the audience embarks on the TNN troupe for a short hour of cabaret. They tell us in song, with humor and emotion, the rich history of their new stage sheltered by 13th century stones. The first former Franciscan convent, it was deconsecrated during the Revolution to alternately become a stable, apartments, nightclub, cinema and municipal services building before finally hosting the repertoire of the National Theater of Nice. With a maximum capacity of 300 seats, this emblematic venue already reveals a strong identity imbued with Muriel Mayette-Holtz: “Franciscans will dedicate themselves to actors and artists in refined sets, with shows based on the game, and where dancing music will have its place. ”An atmosphere of beauty intuited during this evening, where talking and singing were masters!

Other venues will open in Nice. At La Cuisine, the shows will be more ambitious in terms of decoration and effects, and larger casts will be offered for large repertoire events. The masterpiece of the great repertoire will be presented for the premiere Berenice of Racine starring Augustin Bouchacourt, Carole Bouquet, Frédéric de Goldfiem, Jacky Ido and Ève Pereur, following the TNN director’s desire to “share this beauty with the public, especially to show that it is in no way difficult or inaccessible” . A third room near the train station, the Iconic, “will host magic, local roots through regional companies and a focus on unique performers,” Muriel Mayette-Holtz tells us. It will host solos, laughter and contemporary theater to offer a mixed program suitable for audiences from all over. And finally, a final stage will be installed in the heart of the future Palace of Arts and Culture scheduled for 2025. In short, a series of exciting challenges face the National Theater of Nice, trapped by the ambition for its director Muriel Mayette-Holtz decided to revive the theater as close as possible to its audience.

Arrival in TNN in May:

From the 2nd to the 6th of May From the 4th to the 7th of May at 3pm or 8pm: The Little one in the deep forest by Philippe Minyana, directed by Pantelis Dentakis

From the 20th to the 25th of May at 8 pm: Bereniceby Jean Racine, directed by Muriel Mayette-Holtz.