On Saturday, March 27, at midnight, three members of PETA Germany and four volunteers were at the table, in their accommodation, about forty kilometers from the Médyka border post in Poland. They gather around their dishes to find a new way to drive the injured Ukrainian animals further west in Europe.

“It is not difficult to get through the Ukrainian side, it is only long, it can take between one and six hours. On the other hand, Polish customs agents are not grateful to see dozens of cages. They believe the animals are returning to Germany to be resold on the black market. And they are afraid of being vaccinated against rabies.explains Max, who has been back and forth for twenty years since the group moved to Poland.

Monic, centered, prepares a plan so that all members of the team can understand their role and where they need to go. | Jean-Baptiste Bornier / DR Collective

A few hours earlier, they had tried to reach Lviv, sixty kilometers from the border. Monic, Timothée and Maxime had to turn around just a few minutes from the city. “Our contacts on the site warned us that Lviv was being bombed by the Russians”sighs Timothy. In fact, Vladimir Putin attacked a fuel tank east of the city and injured five people. A new attempt will be made the next day, the team will have to take care of about thirty dogs and fifteen cats. Meanwhile, everyone finishes their plate prepared by Yann, one of the volunteers in charge of custody, before going to bed. A great day awaits them the next day.

All over Eastern Europe

On Sunday, as every day, the alarm clock is at 7.30am, everyone has breakfast and prepares the food of the day: “We know when we leave, but never when we return”, insists Monica. In his right hand, the plan drawn up the night before indicates to each team its mission. The aim today is to cross the border at Medyka and recover the animals fifteen miles away in a wasteland. “to avoid any problems with the army”, adds Monica. Two members of the Ukrainian Animal Rescue Association Kharkiv bring the animals to PETA members. 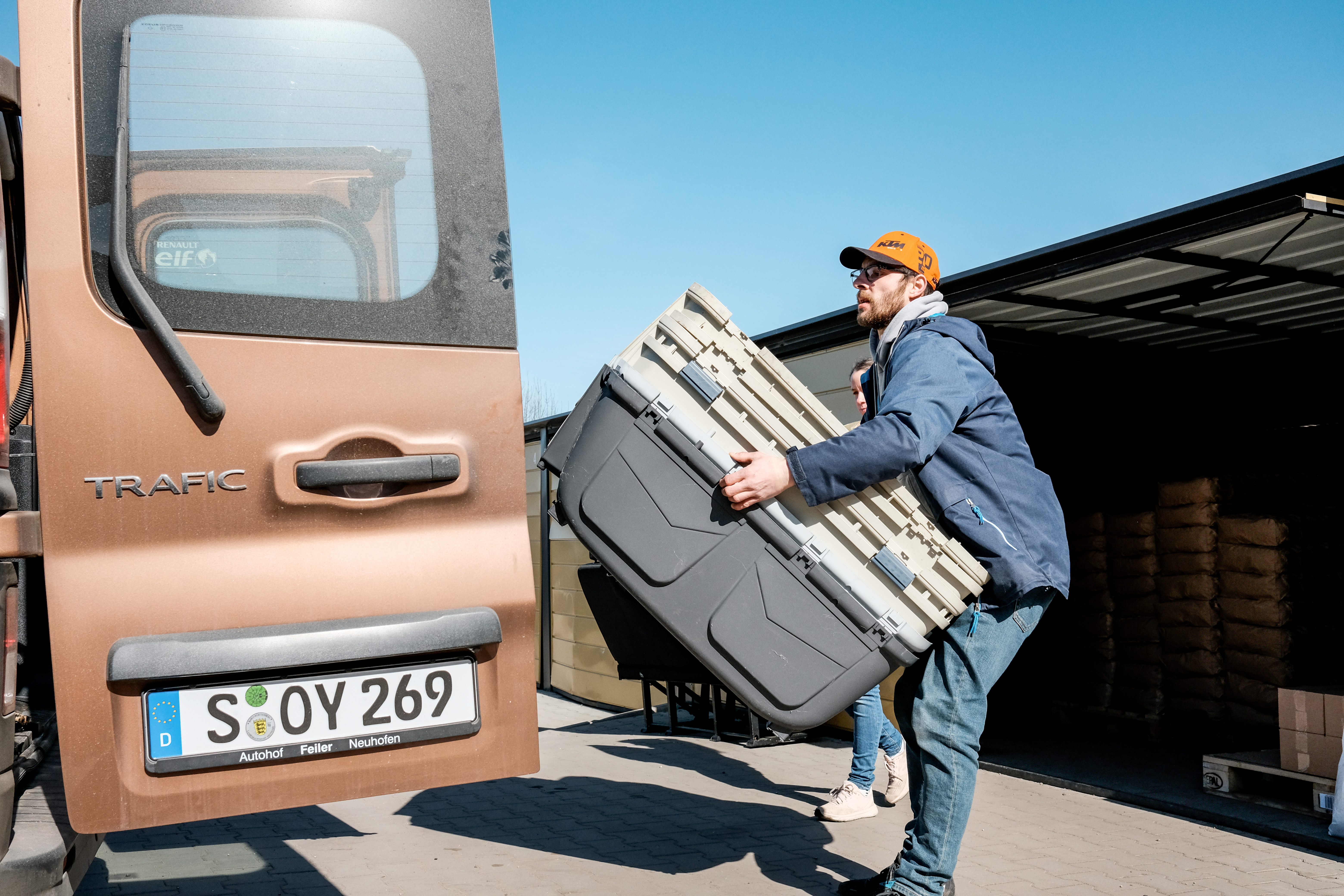 The association benefits from a food and cage storage site in Przemysl. Timothée is loading boxes for dogs. | Jean-Baptiste Bornier / DR Collective

It takes about an hour to cross the border. Once at the meeting point, the members of the Ukrainian association Yarina and Oskar are already there. Impossible to lose them, dogs bark at death: “You were in shelters, under bombing in Kyiv and Kharkiv. Some of us are burned, others simply traumatized by the violence of the fighting.sighs Yarina.

The smell also gets in the throat. It took the duo a few hours to get here with the dogs and cats, the latter being on their feces for much of the way. “We have no choice, we can’t do otherwise. It’s hard to see, but you have to tell yourself they’ll be safe and cared for later.”points out. “They can drive for up to 48 hours in a few days. It’s traumatic for them, but not as much as the bombings. It’s a small price I’m willing to pay for their comfort.”explains Yarina. 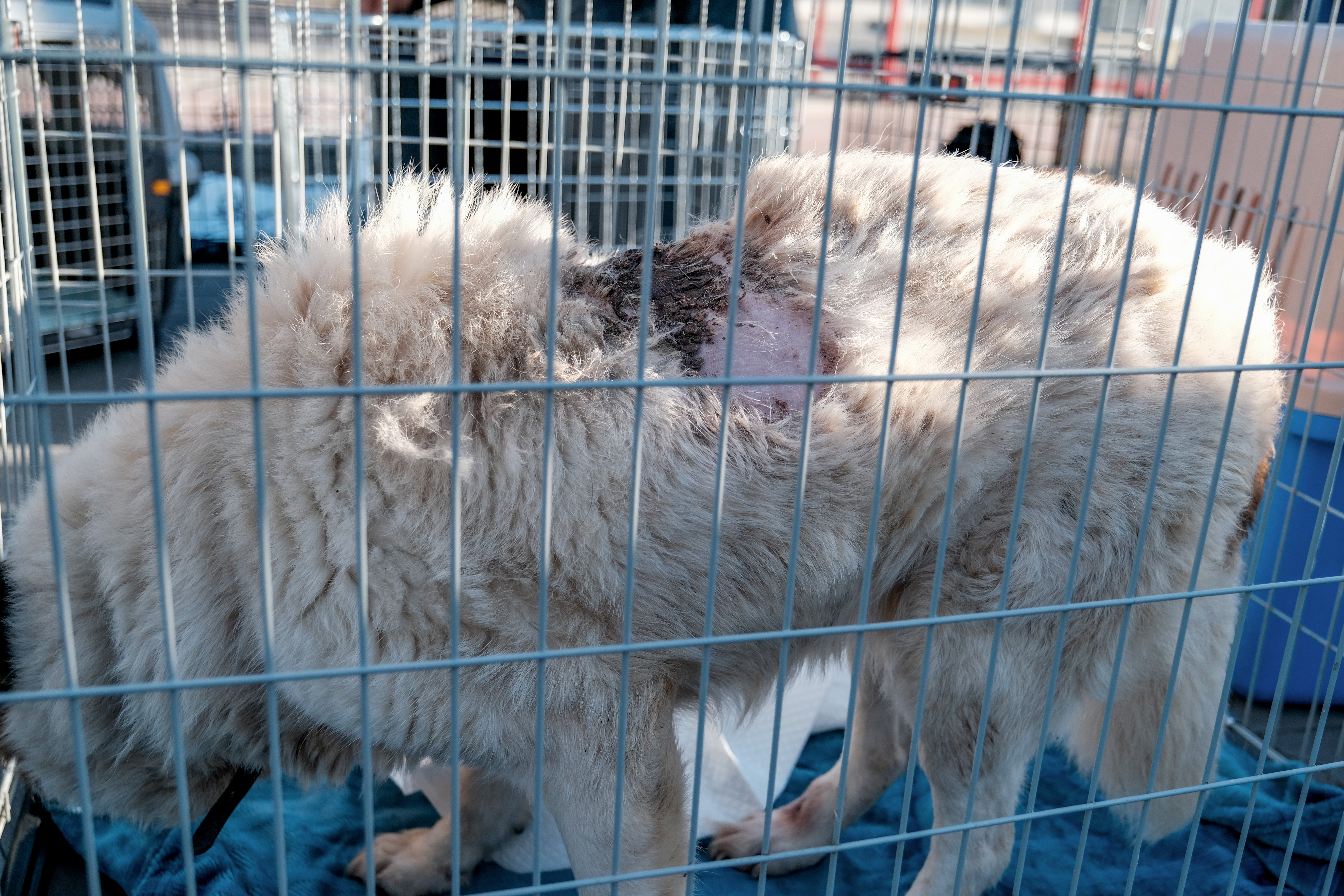 A dog burned after an attack in Kyiv. | Jean-Baptiste Bornier

It takes just over an hour and a half to move each animal to another clean box and then place them all in the cars. It is 2 pm when the three-vehicle convoy leaves the border with Ukraine for a border post in Romania. “We have an influential contact in Romania who called the station to let us pass, raises the Yarina. Otherwise, with so many animals, we would never have been able to do that. “

Roads are in poor condition. At some points, it takes almost forty-five minutes to cover ten miles. “We can’t afford to drive fast with all the animals behind us”, says Yarina. The small group then passes through Romania, Hungary and finally Slovakia before returning to Poland. It took almost fifteen hours by road to return to Medyka, while it would have taken only two hours across the Ukraine / Poland border post. Everyone drove back for just a few breaks, time to eat and rest for about ten minutes. But once there, fatigue and tension give way to joy. Everyone is happy to have been able to carry out the mission. 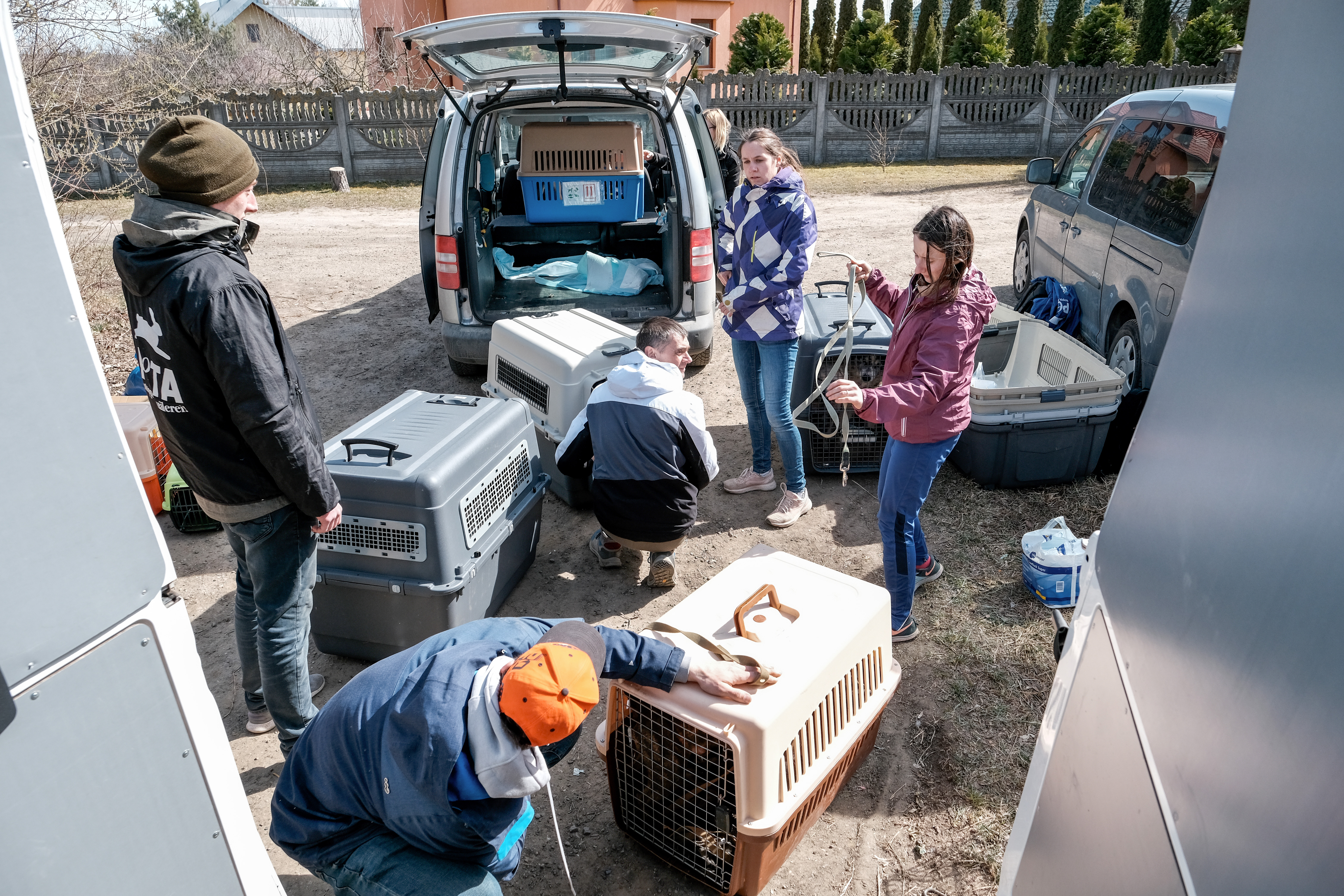 Three vehicles are needed to transport the animals. Each was placed in a clean cage for minimal comfort. | Jean-Baptiste Bornier / DR Collective

It’s 9 o’clock in the morning when three members of the Lithuanian association LionHeart arrive to take care of the animals and take them to their shelter. “Once there, we treat them, take care of them and find them a new family”, explains Ingrè, at the head of the association. These animals, which have come from the heart of Ukraine, are still waiting for nine more hours on the road, but will travel in larger and, above all, cleaner boxes. The rest of the day, everyone can do whatever they want: usually a shower and a nap before the evening meeting to plan the operations for the following days. “We have to do our best before Saturday, as we will all return to Germany on Sunday. In one month, we saved almost 1,000 dogs and cats.Monica smiles.

On Tuesday, March 29, the mission promises to be relatively straightforward. Round trip between Medyka and Lviv to collect seven cats. The team arrives at 3 a.m. in one of the city’s southern districts. The cats are in a cellar. It was Yustina, a young Ukrainian woman, who decided to help them by hosting them. A few minutes after the arrival of PETA members, sirens sound to warn of the bombing. “They just needed this”, sighs Youstina as she tries to retrieve a hidden cat. Finally, the seven cats are placed in the cars in a few minutes and the convoy leaves. “Let’s try a new border post, further north of Prezmysl and Medyka”, Yan explains.

It takes an hour and a half to get there. Once there, stress is present, but the first car passes. The second, which contains only three cats, is blocked. “The problem is that the passports are in the name of the Ukrainian owners and because we are German it doesn’t happen.” Decisions are quite random at the border. One car can pass, but the second cannot. So Max and Marie have to turn around to try to cross another border post. They will have to drive all night, go around Lviv, find a hotel. The next day, they gave the cats to the Ukrainian refugees. The latter were able to cross the border and then return the cats once in Poland.

“A haven of peace”

When not brought by another association, cats and dogs are cared for in a clinic in Poland and then taken to shelters. Joanna decided to create her own a few miles from Przemysl: “A small haven of peace where we take care of these poor animals.” About 120 dogs and 60 cats are welcomed before finding a new family. “I make sure I meet interested people and go to their house to make sure the animals have a good life.”says Joana. 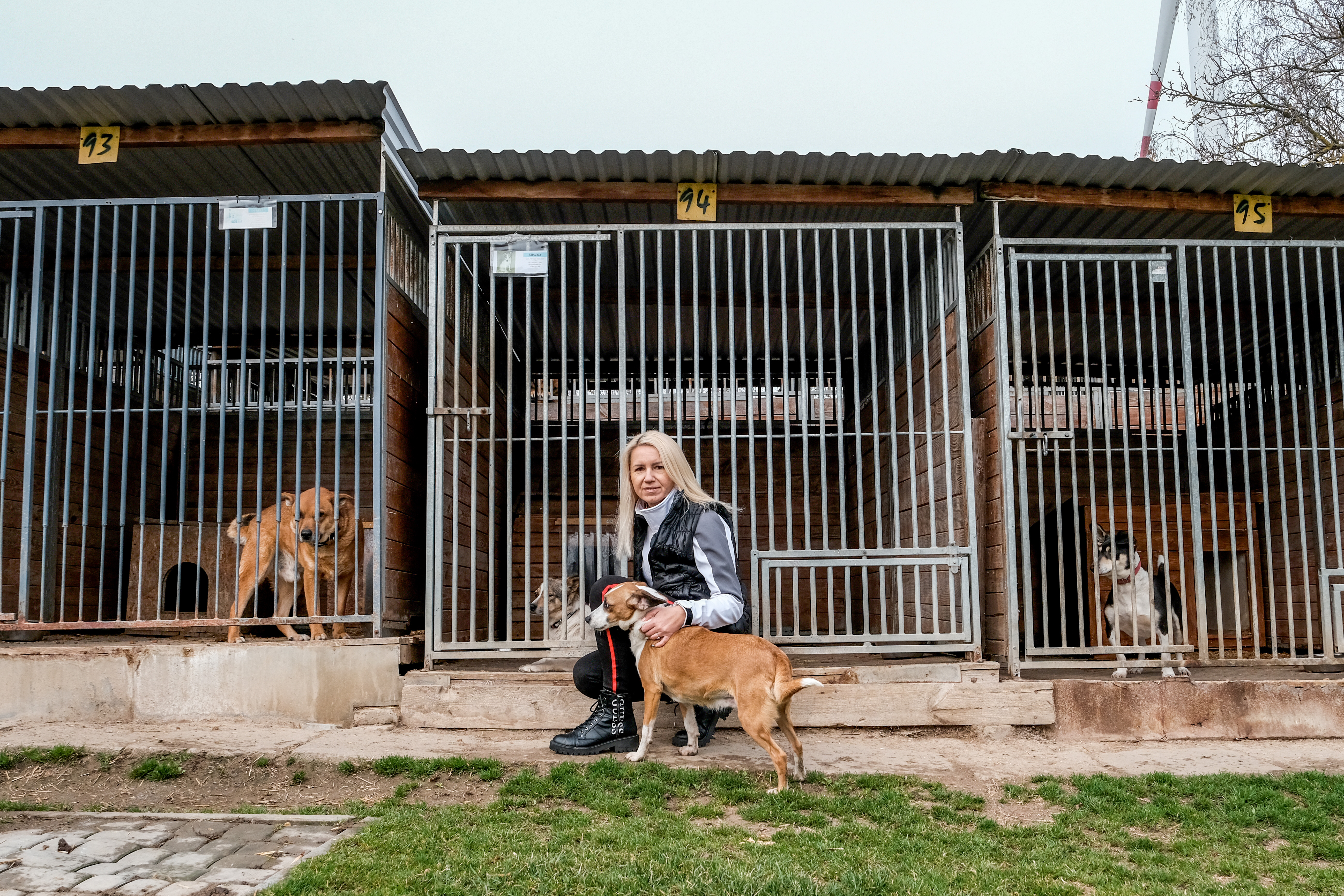 Joanna, the owner of the shelter, hired twelve workers to take care of the animals and make arrangements. | Jean-Baptiste Bornier / DR Collective

“This is the largest operation ever organized in Europe by PETA”, insists Dan, the man behind the entire logistical and operational organization of the small group. He was the one who put everything in its place, found shelter, cars and warehouses for cages and food. “But as it becomes increasingly difficult to cross the Polish border with animals, we have to leave.”, he regrets. So most members of the group returned to Germany, while another operation took place in Hungary, where it is easier to organize the rescue of the animals.