Surprising as it may seem, Lexus, the premium brand of the Toyota group, today unveils its first 100% electric car, while the Japanese automotive giant is known for its experience in hybrid vehicles. Here is the Lexus RZ 450e SUV, the “cousin” of the Toyota bZ4X.

So Toyota took the time to launch its first 100% electric deals. Thus, the bZ4X was introduced in October 2021. Two months later, more than 15 100% electric Lexus and Toyota concept cars were unveiled in an impressive event, the latter marking the power of the Asian group. Today, the Lexus RZ 450e SUV is introduced as an electric vehicle (EV), the first electric car in Lexus history.

Compared to the bZ4X, this gives an increase in length of 12 cm. As for the design of the new Lexus RZ 450e, it is definitely true to a philosophy that we will describe as sharp and hypermodern loved by Lexus. 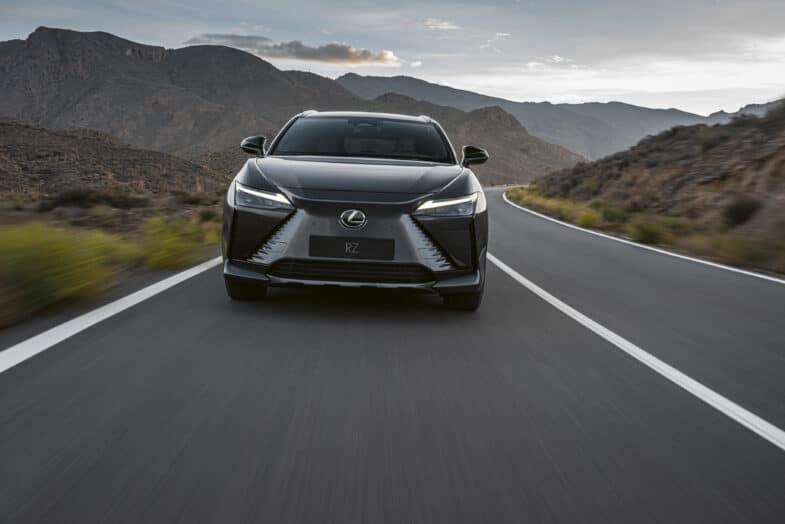 In front, then, is a very imposing grille, this time full like the vast majority of electric cars. A two-color treatment is also offered in this new zero-emission SUV, but the French market will not benefit. The straight, imposing front contrasts nicely with the fine “arrowhead” optics, while the air intakes developed to optimize the treatment of airflows “cut” the front bumper. From this angle, the style of the Lexus RZ 450e is quite attractive, especially with the forward projections of the shield that incorporates a multitude of mini aerodynamic appendages. In addition, the RZ450e’s grille has so-called “active” shutters. 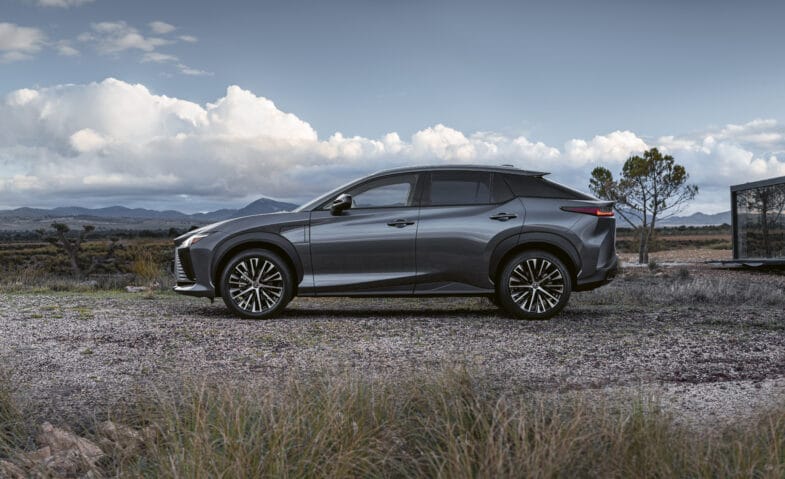 In profile, an SUV is still an SUV, the new Lexus RZ 450e, however, reveals interesting efforts, especially at the level of the top of the front fenders that join the contours of the bumper, although it continues its course towards the bottom of the side glazed surfaces. The rear fenders of the RZ 450e also lack character, as do the rocker panels that are hollow and elevated. As for the rims, they are very large (20 inches). 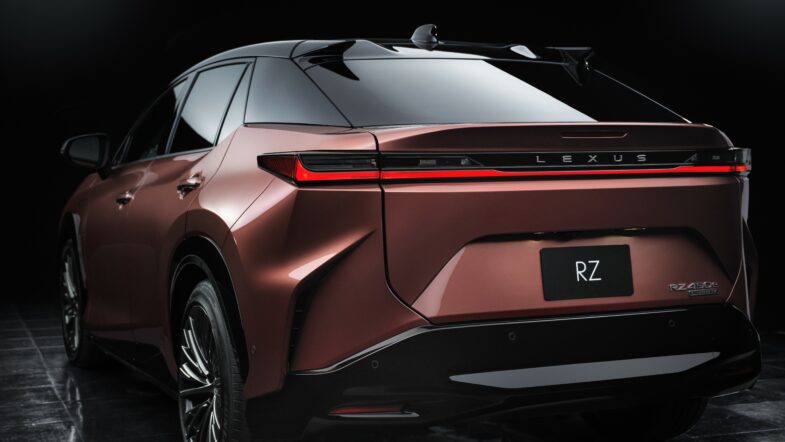 Seen from behind, the Lexus RZ 450e once again reveals a cool design knowing that the first Lexus electric car shows a sharp drop from the roof like a coupe SUV. A long strip of light connects the rear lights, this set with views of very elaborate volumes. 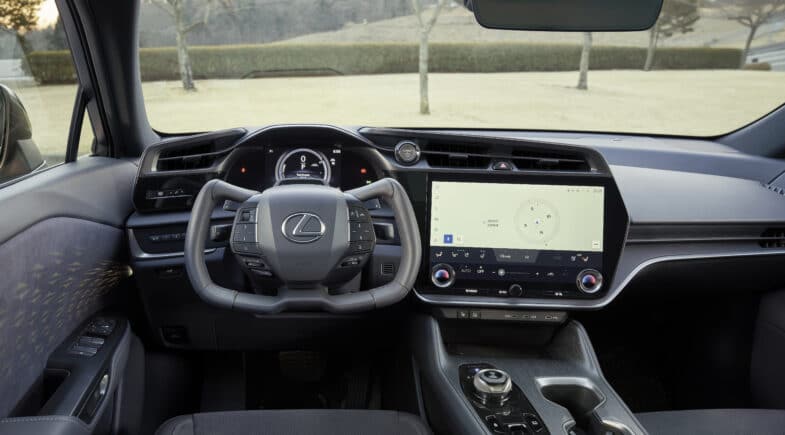 We enter the Lexus RZ 450e to discover a high-tech and luxurious environment. Perfectly designed, this interior gives a privileged place to noble materials and other brilliant inserts, but the designers of this living space of cars have not fallen into an exaggeration of modernity, and so much the better. We admit that the aviation steering wheel has its effect! At launch, the Lexus RZ 450e will be offered in France with this steering wheel, there will also be another more classic “hoop” to choose from. 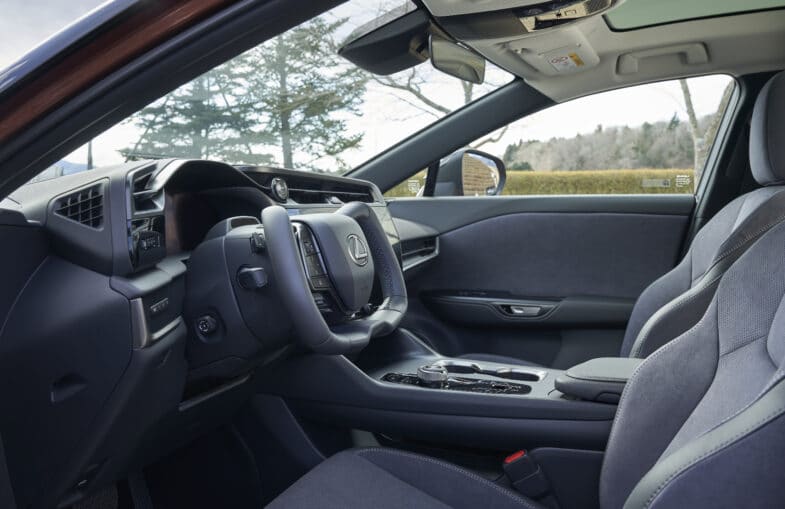 On the other hand, the digital instrumentation (TFT screen with a size of 7 ″) taken from the Toyota bZ4X seems a bit tight for a vehicle that responds to the premium automotive market. The 100% electric Lexus SUV makes up for it with the presence of a large 14 ″ touch screen on the Lexus NX, the Toyota bZ4X settled for a 12 ″ device. 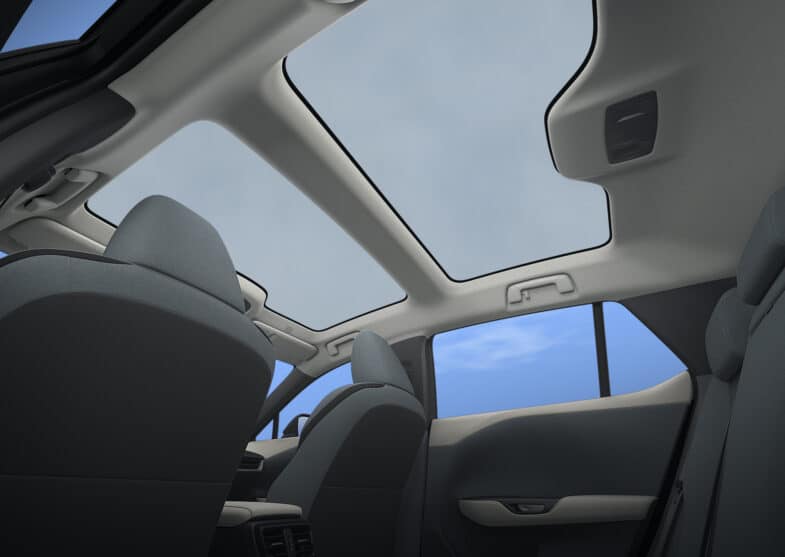 The Lexus RZ 450e includes high-end driving aids and other on-board equipment with mainly technology called “One Motion Grip” or, according to the Lexus press release “The world’s first electronic address with Steer-by-Wire steering wheel. » Note that the futuristic steering wheel mentioned above is associated with this direction. 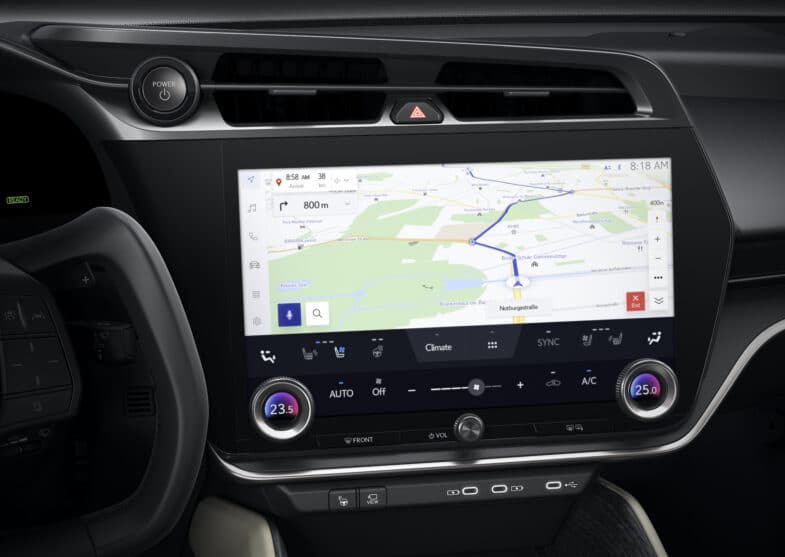 In terms of habitability, it looks great with the wheelbase of 2.85 m that appears in the data sheet of the Lexus RZ 450e, having not communicated its load volume. 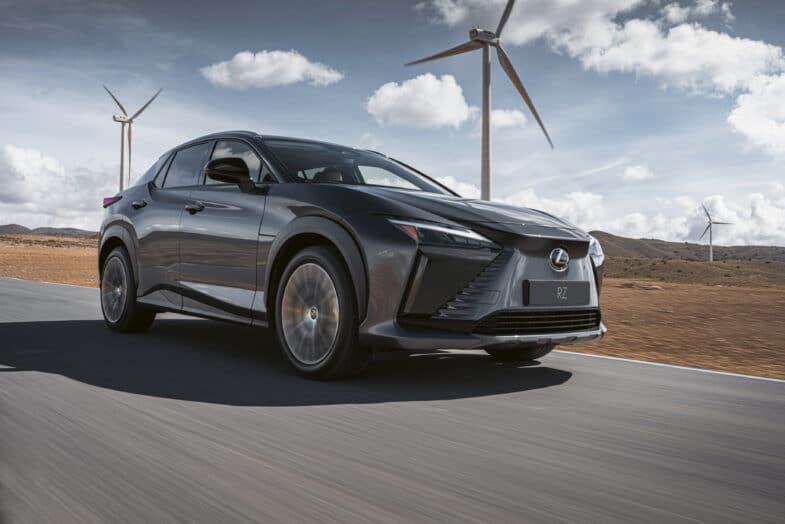 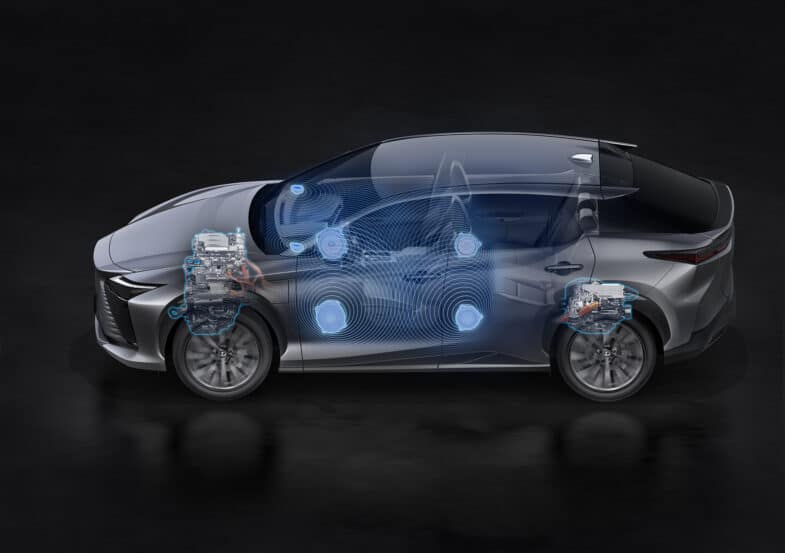 The torque can be sent independently to the front or rear wheels, thanks to another great novelty for the RZ 450e, ie the all-wheel drive “Direct4” also able, intelligently, to handle in a lot less time than I should write. that is, the distribution of the couple. Lexus does not comment on the performance of the RZ 450e and the recharging of its battery. What we do know is that its battery pack has a capacity of 71.4 kW, for an announced range of more than 400 km. 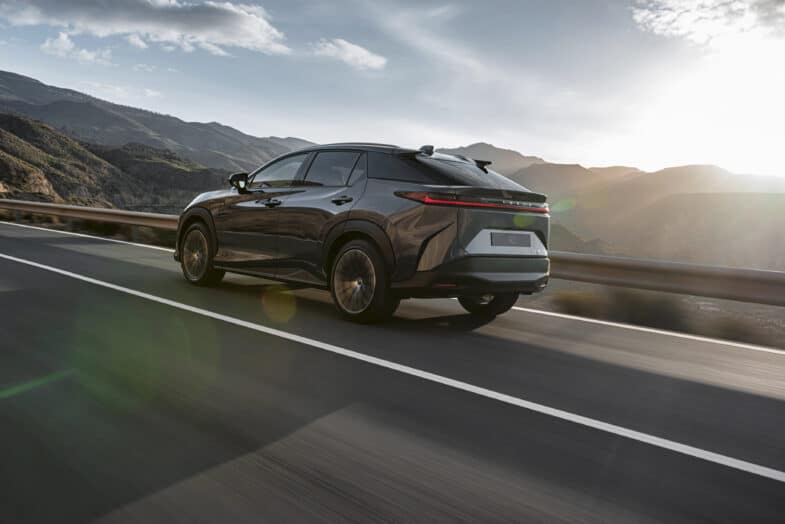