Release of version 5.0 of the Bootstrap framework is scheduled for late spring this year, and changes are being made for the time being. The latest notable change is the drop in support for the latest versions of Internet Explorer (IE) browser. The new version of Bootstrap will no longer be compatible with the browser not only for Internet Explorer 10, but also for 11. This follows the February 2019 announcement of the removal of the jQuery library in favor of pure JavaScript.

Bootstrap is arguably the most popular HTML, CSS, and JavaScript framework for developing responsive, mobile-oriented web projects. Provides useful tools for creating website and application design. Bootstrap contains snippets of HTML and CSS code for buttons, navigation tools, and other interactive elements, as well as optional JavaScript extensions. Bootstrap 4.0 was released in January 2018 after more than three years of development and its version 5 has been in development since last year.

Version 4.0 was introduced as a complete rewrite of the library. Thus, there have been many changes incompatible with previous versions. Like version 4.0, version 5 is also a major release that announces several breaks with its predecessors. Recently, the CSS framework development team started removing support for IE. The information comes from a confirmation made a few weeks ago on the tool’s GitHub page. So what impact will this have on developers in the future? 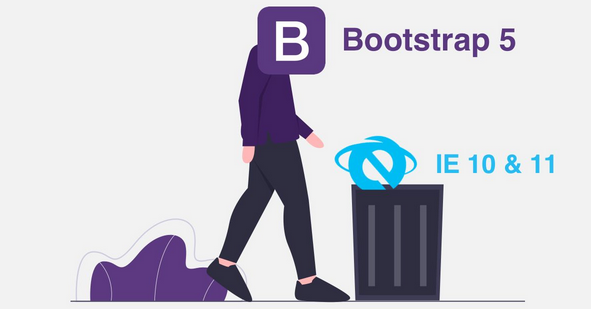 For some, it was painful to always have to take a step back and make solutions specifically for IE browsers. According to them, most of the time this makes the development much less fun, but it also drastically increases the time required to complete the projects. Thus, they believe that this decision will improve the development with Bootstrap and, given that the use of IE 11 will decrease steadily over the coming years, this functionality will be less and less demanding.

By the way, according to W3counter’s IE usage statistics, a site that provides statistics on the market share of browsers and platforms, IE 10 usage has fallen sharply below 1% since the beginning. Most importantly, Internet Explorer 11 went from about 9% in 2015. to 2-3% since 2017, but since then it seems to have stabilized in that range. However, Microsoft intends to support IE 11 until the end of support for Windows 10, October 14, 2025.

In addition, Microsoft no longer recommends the use of IE, but now recommends using its Edge browser, which is now based on the Chromium engine. But why is it still supporting IE? In response, it is because some people continue to use it. These are, for example, people who don’t care much about the browser they use or some big companies who don’t feel ready to invest in upgrading their infrastructure. Won’t there be situations where this support will be needed?

According to some developers, this is likely to be the case. We can cite, for example, the particular case of projects aimed at companies. So what do we do in this case? We will probably proceed as in the case of other tools. Although there is no longer any official support for Internet Explorer, there are probably alternatives to making Bootstrap websites work in Internet Explorer. Perhaps it would be better for some of these media to be mentioned in the official documentation.

Some already think that Polyfill.io would be the solution to use Bootstrap v5 in IE 11. It is a service that accepts a request from a set of browser features and only returns the polyfills needed by the requesting browser. Here are some examples of changes already announced for Bootstrap version 5:

What do you think?

Bootstrap 4.0 is officially released. An overview of notable changes to the website collection toolkit